$125,000 In Champion Racing Sponsorships Available Through 2014 'Search For A Champion' Contest 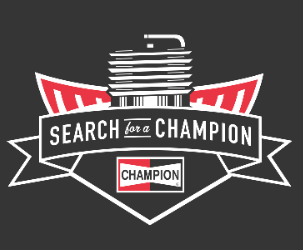 Grassroots racers, get out your video cameras and get ready to compete for a piece of the $125,000 in sponsorship money that will be awarded through the Champion spark plug, wipers and chemical additives brand’s 2014 “Search for a Champion” contest. Now in its third year, the popular web-based contest has already awarded $225,000 in sponsorships to 20 up-and-coming competitors representing virtually every form of engine-driven racing.

The 2014 contest, which will be open for entries beginning Nov. 1, 2013, at www.AlwaysaChampion.com, will offer 15 $5,000 Champion racing sponsorships as well as one $50,000 Search for a Champion grand-prize sponsorship. To enter the contest, grassroots racers must submit a 2-minute video that best demonstrates their commitment to winning a racing title with the help of Champion spark plugs. In addition to competing for sponsorships, the first 250 entrants will receive a free Champion “swag” bag, complete with a contest decal and Champion hat and t-shirt. Winners will be selected based in part on votes received from the Champion community at www.AlwaysaChampion.com.

“Champion has been an unbelievable racing partner for us,” said reigning Search for a Champion grand-prize winner Bobby Pierce, a 16-year-old Dirt Late Model driver who this year has won eight races and posted more than 40 top-10 finishes. Among his eight wins were four in the DIRTcar Summer Nationals, making him the youngest winner in series history. “I hope to become one of the world’s top professional drivers, and if I get there I’ll never forget the role Champion has played in my success,” he said.

The 2014 contest will accept entries from grassroots racers in three broad racing categories – Asphalt, Dirt and Water/Snow – covering everything from junior dragster, go-kart and motorcycle racing to snocross and personal watercraft competition.

“We’re interested in any grassroots racer or team that shares Champion’s passion for all-out performance,” said Jessica Wynn, digital marketing manager for Federal-Mogul. “Of the hundreds of videos we have received during the first two years of the contest, the best have demonstrated the racers’ understanding of Champion’s unparalleled racing heritage and explained how a sponsorship would help them break through to the next level of success.”

Video entries must be submitted to the www.AlwaysaChampion.com website between Nov. 1, 2013, and Jan. 3, 2014. The Champion community will vote for 15 finalists between January 6 and February 2. Voting for the $50,000 Search for a Champion grand prize will take place February 21 through March 23.

In addition to the free Champion swag bags for entrants, Federal-Mogul will award free Champion hats and t-shirts to the first 200 fans who register and vote in the contest.