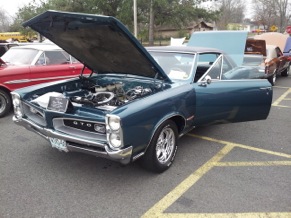 Roger Walker, owner of a beautifully restored 1966 Pontiac GTO, is the inaugural $5,000 grand-prize winner of the Champion “King of the Road” contest, Federal-Mogul’s innovative Web-based program that enables consumers to enter and vote for their favorite rides. Walker, of Jacksonville, Ark., was one of 10 weekly King of the Road winners who faced off in the final round of consumer voting at www.AlwaysaChampion.com. The contest is sponsored by Federal-Mogul’s iconic Champion brand of spark plugs, wipers and chemical additives.

A popular attraction at regional car shows, Walker’s classic “Warwick Blue” GTO was restored in 2010 after being parked for nearly 35 years. His father purchased the car in 1968 and raced it for seven years before moving on to other interests. The car features a Pontiac 400 H.O. engine with 6X cylinder heads, a Muncie M22 “Rock Crusher” transmission and 355 gears in a 12-bolt Positraction rear end. The GTO garnered 23 percent of the total votes cast in the King of the Road finals. More than 63,000 votes were registered during the 10-week contest.

“King of the Road has helped thousands of automotive enthusiasts join the Champion brand in celebrating our shared passion for world-class technology and performance,” said Federal-Mogul Digital Marketing Manager Jessica Wynn. “Roger’s GTO and the great stories behind it really stood out for our voters, but there were hundreds of entries that received support from consumers worldwide.”

In addition to Walker, the 2013 King of the Road finalists were:

The 2013 Champion King of the Road program awarded $500 cash prizes to the winners of each of 10 weekly rounds of voting, with weekly winners automatically being entered into the $5,000 grand-prize round. Anyone could vote for their favorite entry and participate in other contests and promotions simply by completing a free registration at www.AlwaysaChampion.com.

“Based on the popularity of this program, both among entrants and enthusiasts, we’ll be back with an even bigger and better King of the Road challenge in 2014,” Wynn said.

To learn more about “Performance Driven” Champion products and to view this year’s 10 King of the Road finalists, visit www.AlwaysaChampion.com.