We would be remiss if we didn’t ­congratulate Chevrolet on its 100-year ­anniversary and its contributions to the automotive industry.

Interestingly, only a year earlier in 1910, Durant was forced from his position at General Motors — the company he founded. But that didn’t stop him from being a part of the burgeoning auto industry. He regrouped with other partners, including Chevrolet, to develop a new car. Durant believed Chevrolet’s reputation as a racer would help sell the car, so it was named for him.

Chevrolet’s first car, the Series C Classic Six, was a large motorcar design. Equipped with a sizeable 4.9L (299 cubic inches) six-cylinder engine that produced 40 hp, the car could hit a top speed of about 65 mph. It sold for $2,150 or the equivalent of nearly $50,000 today, when adjusted for inflation.

Despite its high price, the Chevrolet was regarded for its style, precision and comfort. Durant was also working on producing a smaller, more affordable car called the Little. Sales of both were strong, but Durant recognized the strength of the entry-level field and steered his company in that direction.

The Chevrolet Series C and the Little were produced through 1913. In 1914, the basic Little platform was remade as the Chevrolet Model L and later that year, the Model H was introduced.

The refocused Chevrolet line was successful, and this success was credited to value-driven prices compared to competing automakers. Chevrolet also was doing well with its four-cylinder engine that proved durable in those days.
Despite the company’s early success, Durant and Chevrolet differed on the philosophy of the company’s products. The riff between them resulted in Durant buying out Chevrolet’s interest in the company in 1915.

Chevrolet sales continued to grow and the success enabled Durant to buy a controlling interest in GM in 1916. By 1917, Durant was back at the helm of GM and Chevrolet was a division of it.

Durant (again) left GM in 1920. He established another car company and became a prominent Wall Street investor. The stock market crash of 1929 proved fatal for both endeavors. He was bankrupt by 1936. He died in 1947 and was buried at the Woodlawn Cemetery in the Bronx, NY.

Louis Chevrolet also lost his fortune during the Great Depression. He returned to his vocational skills and worked as a mechanic at a Chevrolet factory in Detroit. He died in 1941 and was buried in Indianapolis, near the famous speedway where he forged his reputation as a fearless racer and innovator.

From the very start, Chevrolet brought technology and ­features typically reserved for more expensive cars to its lineup of what was considered affordable cars and trucks.

For example, the Series C Classic Six offered an electric starter and electric headlamps at a time when both were rarities among even luxury cars.

In the decades that followed, innovations such as safety glass, fuel injection, anti-lock brakes and electronic stability control systems were used on Chevrolet models at the same time as more ­expensive vehicles. As one of the largest-selling brands in the industry, Chevrolet’s early adoption of landmark ­technologies fundamentally changed the way they were applied to new vehicles.

For 40 years, Chevrolet seemed content designing, building and installing four- and six-cylinder engines in its ­vehicles. Although Chevrolet introduced a 288 cu in (4.7 L) V8 engine in 1917, it was discontinued a few years later as the company concentrated on producing economy cars.

But all that changed in 1955 when the company introduced its eight-cylinder powerplant — the Chevrolet small-block V8 — which opened a new era in attainable high-performance. 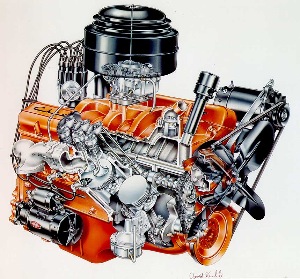 To address the burgeoning performance market of the early 1950s, chief engineer Ed Cole set out to design a Chevrolet V8 that was powerful, lightweight and affordable. His solution was elegantly simple: a compact, efficient 90° V8 engine, featuring overhead valves, pushrod valvetrain and 4.4” on-center bore spacing. The Chevrolet Big Block follows the same formula, with the exception of a wider 4.8” bore spacing.

When it debuted, the Small Block delivered 195 hp with an optional four-barrel carburetor, and outperformed most anything then on the market. But that was just the beginning.

New ­technologies rapidly increased horsepower. Just two years after the Small Block was introduced, the addition of fuel injection increased output to 283 hp — or 1 hp for every cubic inch of the 283 cid engine. By 1970, the Chevy V8 family grew to include a staggering 450 hp, 454-cid Big Block.

The performance characteristics of the small-block V8 helped establish Chevrolet as a force in almost all forms of motorsports. Chevrolet-powered racecars were immediate contenders in the fledging stock car and drag racing worlds of the 1950s, growing to ­dominate them in the next decades. Chevrolet is the winningest brand in NASCAR and has collected more NHRA Pro Stock Manufacturers Cups than any other brand.

“The introduction of the Small Block changed everything,” said Jim Campbell, vice president, GM Performance Vehicles and Motorsports. “The Small Block was an instant success because it offered customers high performance and an affordable price, in a compact design that was very easy to modify. The Small Block also started a wave of innovation — and escalating performance — that transformed the cars Americans drove on the street and the track.”

The Chevy Small Block engine would go on to power millions of cars and trucks during the past 50 plus years, with its legacy passed on to a new ­generation of small-block V8s that is used in today’s trucks and SUVs, as well as performance cars including the Camaro SS and Corvette.

In fact, the company recently reported that the 100-millionth Chevy Small Block engine would be produced this fall, commemorating a defining chapter in Chevrolet’s 100-year history.

Today, Chevrolet sells more four-cylinder engines than V8s. But, descendents of the original Chevy small block still power Chevrolet’s most-capable production and racing vehicles. As per the ­original, the newer V8s are physically small and light — and extremely ­efficient at turning fuel into horsepower.

Where they differ are the modern technologies that would have sounded like science fiction 50 years ago, such as all-aluminum blocks, titanium connecting rods, Active Fuel Management and ­variable valve timing.”

“Constant innovation and evolution have made the Small Block relevant for more than 50 years,” said Winegarden. “We are actively working on the fifth generation of the Small Block, which we believe will be the best V8 engines ever made. By adding new technologies, such as direct injection, we will continue to improve the performance, durability and efficiency of the iconic Chevy V8.”

While the automaker has produced some notable advances in automotive design and technology over the years, including the fully automatic shifting Powerglide transmission introduced in 1950, front-wheel-drive compact ­vehicles in 1979 and last year’s plug in hybrid electric technology developed for the Volt, the Small Block Chevy, though is probably Chevrolet’s most noted ­achievement in its 100-year ­history.

Happy Birthday Chevrolet — You’ve given us many happy days!