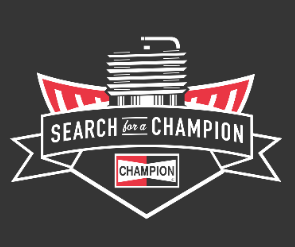 A field of nearly 400 talented grassroots racers has been pared down to 15 finalists in the Champion Spark Plug brand’s $125,000 “Search for a Champion” racing sponsorship contest. Each finalist will receive a $5,000 Champion sponsorship for the 2014 racing season and advance to the $50,000 grand-prize round of voting, which begins Friday, Feb. 21 at www.AlwaysaChampion.com.

The annual Search for a Champion contest enables grassroots racers to battle for $125,000 in sponsorship packages by creating videos that demonstrate their commitment to winning a racing championship in virtually any form of engine-driven competition. This year’s contest attracted a record 391 participants, and first-round votes rose by more than 150 percent to more than 208,000.

“Search for a Champion gets bigger and more competitive every year,” said Jessica Wynn, global digital marketing manager for Champion Spark Plug manufacturer Federal-Mogul Corp. “The quality of our video entries has never been better, and each of our 15 finalists will be an excellent representative of ‘Performance Driven’ Champion technology throughout 2014.”

This year’s Search for a Champion finalists are:

Final-round voting will take place Feb. 21 through March 23, and the Search for a Champion $50,000 grand-prize winner will be announced Monday, March 31, at 9 a.m. E.T. To review the 15 finalist videos and cast your free vote, simply visit www.AlwaysaChampion.com.

In addition to the 15 finalists, Federal-Mogul has selected 12 contest participants who will receive $500 Search for a Champion Honorable Mention awards: