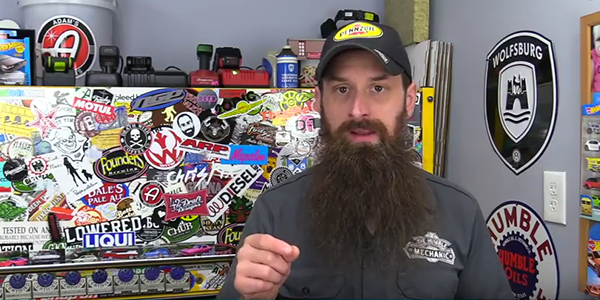 Sometimes, with a little ingenuity, we can do a whole lot with very simple things.

As you know too well, most technicians or mechanics, whatever you want to call us, have tens of thousands of dollars invested in tools and giant toolboxes, with crazy amounts of ratchets, wrenches and sockets coming out of our ears. Those are the things that we use all the time. But sometimes, with a little ingenuity, we can do a whole lot with very simple things.

First up on my list is simply a piece of cardboard. Now what would I use cardboard for to fix a car with? Well, for the most part, it’s used to keep parts organized, whether it’s a small cardboard box to put parts in or a sheet of cardboard that I poke holes in to organize transmission bolts with, I still do both to this day. By “this day,” I mean yesterday, I used cardboard when replacing a transmission.

I love using cardboard. It’s plentiful. I can destroy it, write on it, no big deal, and then when I’m done, I toss it in the trash. Heck, even one of the senior repair guys for Volkswagen recommended that we use cardboard to keep bolts organized on EOS tops, so I feel like if it’s good enough for somebody way at the top of the repair chain, it’s good enough for me too.

The next one may not come as a big surprise, but masking tape is something I use almost every day. We can use it to simply keep parts together. That transmission that I just mentioned with the cardboard, I actually taped the axle bolts to the axle in order to make sure that they didn’t go rogue and run off somewhere. I also use it to tape windows when I’m doing window regulators to keep them from falling down in the door as well as to tape body and trim panels to keep from scratching them. There is not much worse than scratching a trim panel or a body panel on a brand new car.

You can also use masking tape along with cardboard to make any kind of template you might need. I think it was a B6 Passat that didn’t have holes drilled in the rear bumper for the license plate, so we actually used a template out of masking tape and cardboard so we could just lay it on there and drill holes for the plate.

The next thing is a tip that I actually picked up from Eric The Car Guy very recently, and that’s binder clips. I saw him post a picture of using a binder clip to hold a timing belt onto a timing gear and I thought how simple and how brilliant is that? In the past, I’ve used things like zip ties in order to secure belts to pulleys but I really liked the binder clip solution a lot better. It’s got a lot of spring tension and it’s reusable, whereas zip-ties, you pretty much cut them and throw them away.

Next, we have something as simple as Brillo pads. I use things like this all the time and it obviously comes along with cleaning something. I would say the most common thing I use Brillo pads for is cleaning mounting surfaces for things like water pumps and throttle bodies. Whenever I do a water pump, I like to take a little bit of this, run it around the inside of the mating surface as well as the face of the surface and get it nice and clean.

Brillo pads will get rid of any rust or debris, as well as any old gasket or a seal material that may be leftover and it provides a good clean mating surface for the new water pump seal or water pump gasket. If you’re doing a 2.0 liter TSI water pump, absolutely clean it. Don’t just put the pump on with a dirty face. You can almost be guaranteed that you will have a leak.

Early in my career, I made it a standard practice to clean every mating surface before installing any new parts in order to make sure that the job was done properly the first time, and if we’re working on Volkswagen, we understand the importance of a good, clean ground. Something like a Brillo pad works fantastic for that.

Last up is one of my absolute favorite weird things that I use in the shop, and that is nail polish. I love the looks that people give me when I open the drawer and pull out the nail polish for something. A lot of guys will use fancy paint pens or high-end markers to paint mark things. For me, I like a cheap bottle of nail polish, especially for painting timing belts. I learned early on about using things like Wite-Out because the second you hit it with brake clean, it all washes away. Actually, the first ALH timing belt I did, I did with Wite-Out, cleaned it off and sure enough there go all my marks. Like a dummy, I didn’t have it set to top dead center, so that was an adventure of trying to figure out how to set the timing on an ALH when I had only been working on Volkswagens for about two months and fumbling my way through that.

So after that, I switched to nail polish. That was, oh, I don’t know, 10-1/2 years ago and I haven’t looked back since. I generally don’t use blue though. I like a bright color such as green or yellow, something that really stands out against the timing belt and if, for some reason, you get in the mood to have a mid-day manicure and do your nails, you have enough to not only do your nails but everyone else’s is in the shop as well. That actually hasn’t happened yet, but when it does, you better believe I will post a picture of it online.

Editor’s Note: If you want to watch this video, go to https://bit.ly/2S4cSt3. If you have any questions or concerns, post them below the video or send Charles an email at [email protected]

The Humble Mechanic: Weird Things We Use to Fix Cars