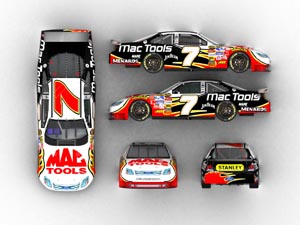 “Mac Tools has built a relationship with Robby Gordon Motorsports over the past three years,” said Mac Tools Director of Marketing Roger Spee. “We are very pleased to have this opportunity to promote our brand in this way for the first time and with such a great driver!”

“We are very excited to expand our relationship with Mac Tools and are even more excited that their first NASCAR Cup race will be with Robby Gordon Motorsports. Looking to the 2008 season, RGM is proud to have Mac Tools involved,” Robby Gordon remarked.

The Cup race will be televised on ABC Network on Sunday, October 21st at 1 p.m. and broadcasted on MRN radio.