the weak link and I don’t want to get stranded out on the road with a dead battery so that determines in part which cars I drive on a longer trip.

“I think your getting involved with the Great Race is a brilliant move on your part,” Bud continued. “Your potential customers can see for themselves your alternator installed on a car or truck just like the one they own and the one in front of them is being driven 4,500 miles across the country in two weeks’ time. They can talk to the owner and get an honest evaluation of your product. That should leave little doubt in their mind that your alternator works. You will now also have a proven reliability track record, and, as they used to say, ‘race on Sunday, sell on Monday.’” 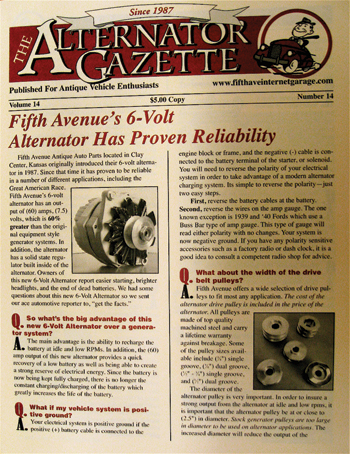 Bud taught me more about marketing than I realized. It took a few more years for everything to soak in and for me to realize that I had just received a priceless education. They often say that with age comes wisdom. I believe that is true.

As I looked at the Great Race cars entered in the race, I saw the sides of cars covered with corporate sponsor decals just like NASCAR. My first instinct was to go have decals made like the “big dogs” and take my proper place and become part of the corporate billboards on the side of a car.

As I began to really watch and pay attention to the videos of the Great Race, it occurred to me that in most cases the part of the cars that got the most TV coverage was the front and rear of the cars. I also watched as local cars came up and followed the Great Race entrants until they could safely pass them. There is an opportunity there, I determined.

Unlike NASCAR in which the cars are on a closed course where the sides of the cars are always exposed to the cameras, in the case of the Great Race cars, it was usually the front of the car as it was coming across a finish line or the rear of a car as it was leaving the starting line that was shown on the films.

So, my newfound logic said if I was going to advertise on a Great Race car, I should advertise on the front and back of the cars instead of the sides like everybody else.

Being somewhat of a non-conformist by nature, that was a logical decision in my mind.

In my collections of “automobilia,” I have about 200 original license plate advertising tag toppers from the 1930s up through the 1950s.

I sifted through my collection and wrote down all the names of the companies who used to manufacture tag toppers. I started calling around and quickly shortened my list considerably — most of the companies were long out of business. 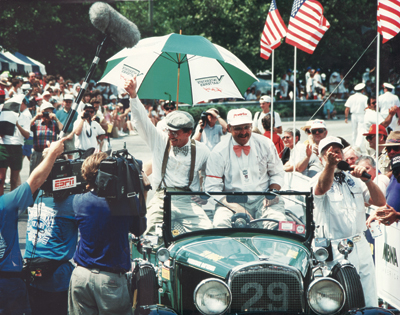 But I found one who still had the equipment around and still made a few for rural volunteer fire fighters. Having been in business since 1946, they knew what I was looking for.

I ordered some license plate tag toppers with my design and information displayed and starting installing them on the cars entered in the 1990 Great Race that had my 6-volt alternator installed. They worked better than I could have imagined.

In 1993, when Howard Sharp won the Great Race driving his 1929 Dodge Sport Roadster, ESPN sports did a 15-minute live interview with him on national television.

He sat beside his car with the interviewer. The only sponsor you could read during the whole 15-minute interview was Fifth Avenue! 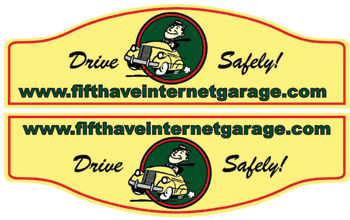 However, too much of a good thing resulted in my license plate tag toppers being banned from the Great Race for the next two years. But, by the third year I got them back on the cars after tech inspection and life has been good ever since.

The tag toppers are actually quite popular with the Great Race entrants because they are a “period correct,” accessory. Also are easy to remove, compared to the decals that often result in damaged paint when removed.

This was yet another example of seeing things from the customer’s perspective — Great Race rules require that all corporate decals be in place on each car entered, regardless of the damage that might occur when the decals are removed.

Bud Melby was wise beyond his years, and as I look back now I have come to appreciate even more the guidance he gave me in my early years.

Besides being a life-long friend, he took the time to help the new kid on the block get off to a good start. We need more Bud Melbys in the world today. 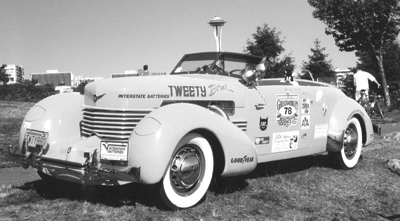 Randy Rundle is the owner of Fifth Avenue Antique Auto Parts, Clay Center, KS, and services antique and classic vehicles for a living. He has prepared vehicles for movie studios, The Great Race, the 10,000-mile “Peking to Paris Motor Car Challenge” and other similar events.

Rundle, an author of six automotive technical books, has spent 20-plus years solving electrical, cooling and fuel-related problems on all types of antique and classic vehicles.
Visit www.fifthaveinternetgarage.com.