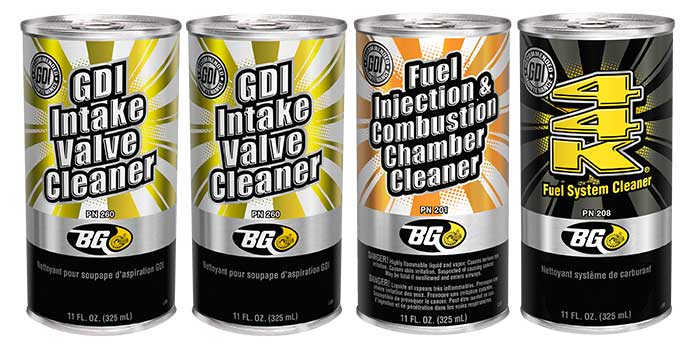 The new BG GDI Fuel/ Air Induction Service is designed to remove carbon from the entire GDI fuel system in under an hour, without engine teardown.

Gasoline Direct Injection (GDI) engines are prone to early carbon buildup. Vehicle owners will notice a drop in power and performance, sometimes before the first oil change. The new BG GDI Fuel/ Air Induction Service will remove carbon from the entire GDI fuel system in under an hour, without engine teardown, says the company.

GDI engines offer the performance of a muscle car with the fuel economy of a mid-sized sedan. GDI injectors spray directly into the hottest part of the combustion chamber for more complete, precise combustion. Add a turbocharger for a power boost and you have an engine that produces more power and fewer harmful emissions … with better fuel efficiency than traditional port fuel injection (PFI) engines.

In the hottest part of the combustion chamber, injectors are constantly exposed to damaging heat and extreme pressure. It’s only a matter of time before injectors plug with carbon deposits and misfire, which leaves the car performing like a horse running on three legs.

Without the injector spraying in the intake like PFI engines, carbon builds more rapidly in intake ports and on the backs of intake valves. Then, incoming air bakes deposits dry, eventually choking the air supply.

At their best, GDI engines are powerful, remarkably efficient engines. But to keep them at their best, they require a high performance solution.

Eco-Air Spray Cans Equip Teams with Tools to Clean, Protect and Preserve
Connect with us

Tools: Get the Edge in Auto Repossession with LTI