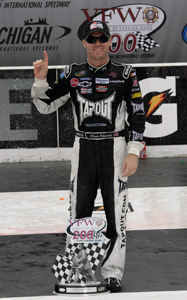 Harvick became the first driver to win a race in all three NASCAR national series at MIS after taking the lead on the final restart and outpacing Timothy Peters (No. 17 Toyota Tundra) in a thrilling green-white-checkered finish. It was his second Truck Series win in just four starts this year.

“Kevin and the entire KHI organization put on a great show right in our backyard,” said Michael Proud, marketing director, North America, for Southfield, Mich.-based Federal-Mogul. “Federal-Mogul and the Champion spark plug team are proud to be associated with one of NASCAR’s premier drivers and team owners.”

“The Champion brand and Federal-Mogul are great partners and we wanted to kick off our new business relationship in style,” Harvick said. “I’m pleased with our win and a top-10 for the Champion Silverado, but this is only the beginning. Champion plugs give us a proven power advantage on the track and we’re going to make the most of it every time the green flag flies.”

The Champion brand and its iconic bow tie logo now represent an extensive portfolio of technologies, including spark plugs; oil, air and cabin air filters; wiper blades; and chemical additives for automotive, lawn and garden, marine, motorcycle, ATV and other applications. These products are available through thousands of retailers across North America. The brand has enjoyed unparalleled success in motorsports, with championships in NASCAR, NHRA, IHRA and Formula One competition as well as in leading motorcycle, go-kart, snocross and other series worldwide.