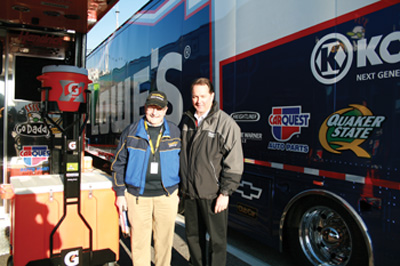 His name might not be as recognizable as Jimmie Johnson or Chad Knaus, but Mike Gregg is one of those innovative resources. He’s played a part of the four-straight championship trophies the No. 48 team has hoisted — not to mention the great racing all NASCAR teams entertain fans with every weekend.

Originally from Belfast, Northern Ireland, Gregg has been an engineer with Veyance Technologies Inc. — the exclusive manufacturer of Goodyear Engineered Products — for more than 40 years now.

Gregg began working at Goodyear’s Northern Ireland plant in 1969. In 1983, the company transferred him to the United States to work in research and development at the company’s Akron, OH, headquarters, where he helped develop belts for camshafts and accessory drives.

“Belts were my specialty,” said Gregg, an easily likeable Irishman whose every other word retains the lyrical accent of his homeland.

Rising Through the NASCAR Ranks
Goodyear Gatorback belts have been used by NASCAR teams since the early 1980s, just a couple of years before he relocated to the U.S. And when NASCAR teams began having reliability issues with the NASCAR-approved V-belt system due to increased engine speeds in 2001, Goodyear knew Gregg was the perfect choice to tackle the task.

Back in Northern Ireland, he had raced Rally cars and had a real passion for speed.

“We ran Mini Cooper S’s way back then,” said Gregg. “I always had an interest in racing, so it was a good fit.”

Gregg worked side-by-side with several teams and NASCAR Research and Development to institute a rule change that would allow for Poly-V belts to be introduced in the garage in 2002, helping better support engines that were making more horsepower.

That same year, Hendrick Motorsports’ new start-up team — a group of hungry racers with all the ingredients for greatness — became the test car for the new Poly-V belt system under Gregg’s watch.

Have you guessed by now who the guinea pig was? The No. 48 car driven by Jimmie Johnson, of course.

“He was the new boy on the block back then,” Gregg said. 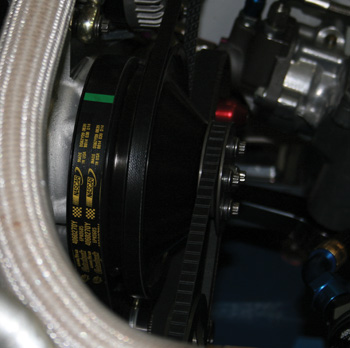 After the No. 48 car began turning the fastest laps, all Hendrick Motorsports race cars in the stable started running the Poly-V belt setup. It’s been the NASCAR standard ever since. The rest they say is four-peat history, no four-leaf clovers needed.

“They (Poly-V belts) have been very reliable,” stated Gregg. “You don’t hear of belt failures on the track like you used to.”
Gatorback Poly-V belts are available in about 200 different sizes, providing engine builders and crew chiefs with an infinite number of engine configurations.

Now based at Goodyear’s Lincoln, NE, facility, Gregg maintains developmental relationships with all NASCAR team engine builders from Hendrick Motorsports to Richard Childress Racing to Roush-Yates. He frequently travels to team shops in Charlotte, NC, and attends between five to 10 races during the season.

“I’m involved with the guys back at the shop and also like to follow up with the teams at the track, too, to make sure everything under-the-hood is working OK,” Gregg said.

After years of trust-building, teams welcome Gregg’s knowledge like a pot of gold.

“What Mike and Goodyear Gatorback have brought to NASCAR belt program technology is very valuable to us in terms of durability,” Andrews said. “Mike’s reached out-of-the-box so to speak on conventional thinking on belt construction and really, really stepped up the belt program here in last 10 years.”

Track-to-Street Benefits
Goodyear Gatorback has been an exclusive NASCAR Performance partner for aftermarket belts since 1997 and a NASCAR Contingency Program sponsor since 2003. Veyance’s weekly “Goodyear Gatorback Fastest Lap” contingency award recognizes the driver with the quickest lap while leading each Cup Series race.

Gregg says the race track is a great testing ground for belt durability. After all, NASCAR drivers are some of the toughest on underhood equipment.

Racing keeps Veyance on the cutting edge of belt technology. The company’s NASCAR partnership is a link between their on-track success and their Goodyear Gatorback consumer line of products. Information gathered at the track is given to Veyance’s R&D facility — the beneficiaries include everyday motorists. 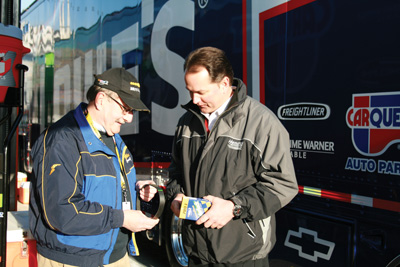 “With belts, nothing can stay still,” Gregg said. “Engines are always getting a little bit faster and you constantly need to keep developing products to meet the need.”

Whether on a race oval or busy highway, everyone who drives an automobile can benefit from Goodyear Gatorback belt technology — and the invaluable knowledge of engineers like Gregg.