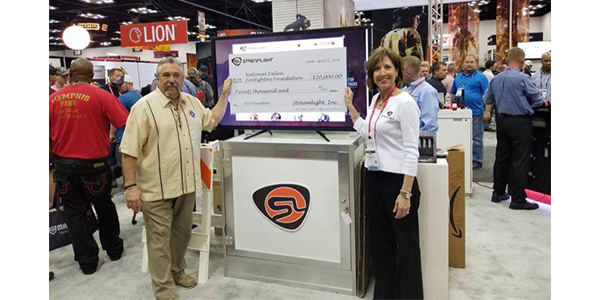 Donations will assist NFFF in commemorating the lives of firefighters who have died in the line of duty, and supporting their families and co-workers.

Streamlight, Inc. announced that it donated $20,000 to the National Fallen Firefighters Foundation (NFFF), including $10,000 in proceeds from sales of the company’s specially marked NFFF Red Nano Light, Red Vantage helmet light and Red Siege AA lantern.  Streamlight earmarks $1, $3, and $2, respectively, from the sale of each light for the NFFF.

The company also contributed $10,000 for renewal of its “Bronze Helmet” NFFF sponsorship.

Both donations will assist NFFF in commemorating the lives of firefighters who have died in the line of duty, and supporting their families and co-workers.

“We are in awe of the risks that firefighters take every day to do their jobs,” said Streamlight President and Chief Executive Officer Ray Sharrah. “Streamlight is honored to continue supporting the families and surviving colleagues of fallen firefighters through our sponsorship of the National Fallen Firefighters Foundation’s programs.”

Streamlight’s sponsorship support also helps fund scholarships awarded to spouses and children of fallen firefighters, and counseling programs for agencies that have lost colleagues in the line of duty.

Congress created the NFFF to lead a nationwide effort to honor America’s fallen firefighters. Since 1992, the non-profit foundation has developed and expanded programs that fulfill that mandate. For more information about the organization, visit firehero.org.

The June/July 2020 Issue of TechShop is Now Available