pressure when testing for repeat failures. On the high end, several tool manufacturers supply testers that simultaneously measure the exact fuel pressure and flow while the engine is running. On the low end, most fuel pressure testers have a bypass valve that measures the excess volume flowing through the fuel pressure test Schrader valve. In most cases, this type of tester will provide a reasonable estimate of the volume of fuel flowing to the engine.

When testing fuel pumps equipped with external fuel pressure regulators, it’s important to test fuel pressure regulator performance by momentarily closing or restricting the return flow hose from the regulator to the fuel tank. This test will provide an indicator of maximum fuel pressure output that, in most cases, will be at least 150% higher than regulated pressure. Because crimping can damage braided hose and plastic lines, an alternate method should be used to close the return line.

If maximum pressure doesn’t increase by momentarily closing the return line, the low fuel pressure might be caused by a worn fuel pump, a clogged fuel filter or crimped fuel line. If the fuel pressure is too high due to a crimped fuel return line or defective pressure regulator, the engine will normally run rich and the fuel pump amperage draw will be much higher than normal. The higher amperage draw will shorten fuel pump life and cause a repeat failure.

It’s also important to evaluate the fuel pump’s activation system. At the most basic level, the crankshaft position sensor supplies a signal to the PCM that indicates the engine is cranking or running. On many older imports equipped with distributors, the air flowing through the air flow meter closes a set of contacts in the sensor that, in turn, activates the fuel pump relay. In either case, the fuel pump relay won’t activate without some type of engine speed input.

FUEL PUMP AMPERAGE
A professional multimeter can be used to measure current flow through the fuel pump. On most vehicles, a new fuel pump draws about three to five amperes of current. This amperage or current draw can be measured at the fuel pump fuse located in the vehicle’s fuse box. See Photo 1. 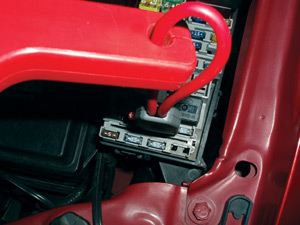 Although the test can’t be covered in this space, many technicians also like to display the fuel pump current flow on an automotive lab scope to determine if the fuel pump armature and brushes are in good condition. See Photo 2. 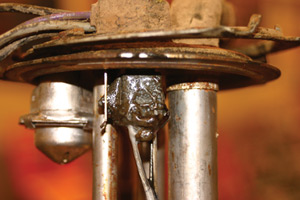 FUEL PUMP REMOVAL AND INSPECTION
If voltage is available at the fuel pump, it’s important to inspect the tank’s electrical connector for looseness and burned connector pins. Repeat failures are often caused by connectors that were burned due to excessive amperage draw of a defective pump.

If the fuel pump circuit is grounded to the frame, perform preventive maintenance by cleaning the frame and connector, and applying anti-corrosion compound to the connection. See Photo 3. 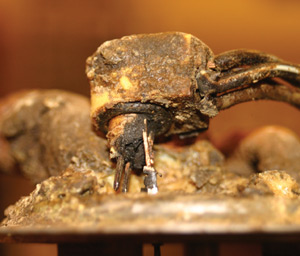 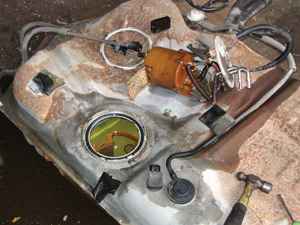 Next, if the internal fuel pump hose or electrical wiring is swelled or cracked, it’s possible that the fuel tank has been contaminated with methanol alcohol. This would be a rare failure, but the possibility shouldn’t be ignored if the hose is badly deteriorated. If the fuel filter clogs frequently, inspect the tank for sediment contamination. Although it’s virtually unheard of nowadays, some fuel additives will attack plastic fuel tank baffles, causing white, grainy sediment to collect in the tank and on the pump filter.

Modern fuel tanks are difficult to clean because of their internal baffling. If a tank can be cleaned, it’s important to use high-pressure soap and water to remove the dirt. The tank should then be thoroughly dried by circulating air through the tank or by simply placing it in the summer sun. In many cases, a fuel tank replacement is the most cost-effective and safe alternative.