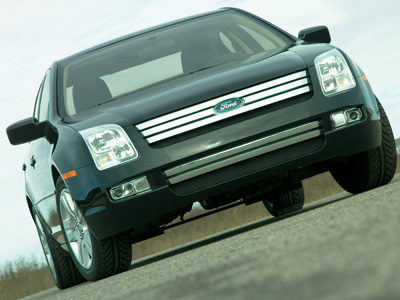 Nestled into the marketing space between the Focus and the Taurus/Five Hundred is the Ford Fusion. The Fusion came on the scene in 2006, and shared a design platform with the Mercury Milan and the Lincoln Zephyr. However, in 2007, the Zephyr was replaced by the Lincoln MKZ.

Internal Issues
The Fusion came with a choice of four-cylinder and six-cylinder Duratec powerplants.

The inline four-cylinder Duratec 23 is a 2.3L 16-valve DOHC engine.

The head and block are both aluminum. It is a coil-on-plug ignition and uses electronic throttle control. 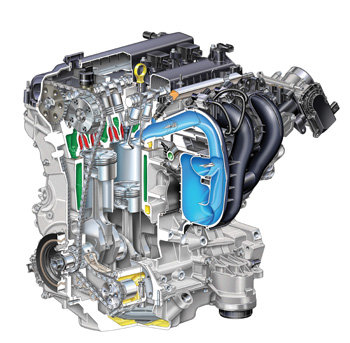 It is a Partial Zero Emissions Vehicle (PZEV) certified engine and has a 150,000-mile recommended tune-up.

To enhance efficiency, the Duratec 23 features Charge Motion Control Valves in the intake runners — similar to those found in the powerful F-150 pickup — to boost torque and improve combustion at low engine speeds. To reduce vibration, the inline four cylinder employs hydromounts in two positions — at the engine and the roll restrictor.

Did You Know…
The I-4 features a direct-acting mechanical bucket-tappet valvetrain, while the V6 engine features a hydraulically lash-adjusted roller-finger follower valvetrain.

The Duratec 30 has hydraulic mounts to isolate engine vibration and movement from the vehicle’s chassis and to level out gearshifts. Hydromounts are filled with a viscous fluid that is pumped from one internal chamber to another in response to the powertrain’s movement. 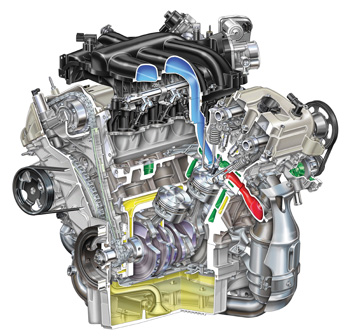 To further refine engine character and improve durability, both engines feature deep-skirted engine blocks. The Duratec 30 also uses a front engine cover made of a sheet metal “sandwich” to absorb sound through what is known as constrained layer damping.

With IPS on a Ford, as duty cycle command from the PCM increases, the cam timing retards. This concept is backwards from that of what you’d find on a Ford vehicle, like a 5.4L, that uses DEPS (Dual Equal Phase Shifting). Unlike EPS (Exhaust Phase Shifting) found on the 2.0L DOHC Focus/Contour/ Escort engine, DEPS and IPS will still use an EGR valve.

Did You Know…
There is no serviceable fuel filter on these vehicles. The fuel filter is built into the fuel pump. But, at least they gave us a trap door under the rear seat to access the fuel pump for replacement.

Transmission Service
The transmission choices in the Fusion/Milan/Zephyr/MKZ are the G5M 5-speed manual and FNR5 5-speed auto for the 2.3L versions. The manual transmission has no fluid surprises. It uses 75w90 gear oil.

The 6-speed auto also contains a fluid requirement surprise of its own. It does not use Mercon V or Mazda V. It simply uses a Mercron/Dextron equivalent.

So, if you get one of these with a faulty range sensor, you won’t be able to replace it unless your shop can program modules. 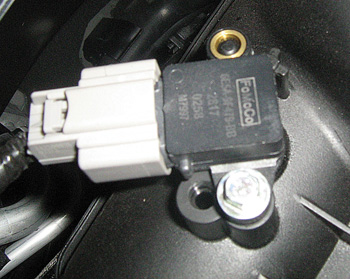 Fluids and Lubes
All of the Fusion engines use 5w20 engine oil. The 2.3L has a service-able filter for the VCT solenoid. The filter is accessed from under the valve cover.

At the intake cam thrust cap is a plug with an allen socket head. Remove the plug and the filter is under it. The base part number on the filter is 6C683. There is no specified mileage for replacement.
On all-wheel-drive models, the Power Transfer Unit (PTU) does not fill all the way to the filler hole like a typical transfer case would. Instead, the fill mark is 1-1/2” below the fill hole. To check the level, you must fabricate a dipstick from a plastic tie strap. 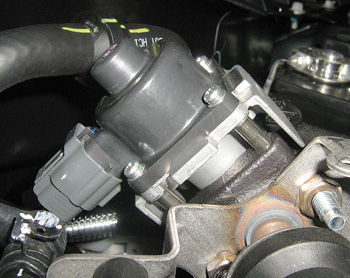 If it is low with no external signs of leakage, then the left internal axle seal is probably leaking. There is a cavity inside the case between the inner and outer axle seal that can fill with fluid. If the PTU is over-filled, then it will push fluid out of the vent at the top when driving.

Note: There is no drain plug on the PTU so draining an over-filled PTU will be difficult. The PTU requires 75w140 synthetic gear oil.

The Rear Drive Unit (RDU) of an AWD Fusion is similar to the RDU of an AWD Escape except that they have different gear ratios. So, even though they might appear outwardly that they will interchange, they will not.

EGR, MAP and Other Sensors
Both the four-cylinder and V6 ­engines use a stepper motor EGR valve. The MAP sensor on these vehicles is used to infer EGR flow, not fuel control.

These engines also use electrically heated PCV valves. The heater in the valve is to prevent icing in the PCV and on the back of the throttle plate. The PCV heater circuits are monitored by the PCM and will set an MIL illuminating code if there is a circuit-related fault present.


Did You Know…
The Fusion radio is a programmable module, meaning if it is replaced for a new one, the new one will have to be programmed with a scan tool or the back lighting will not work. 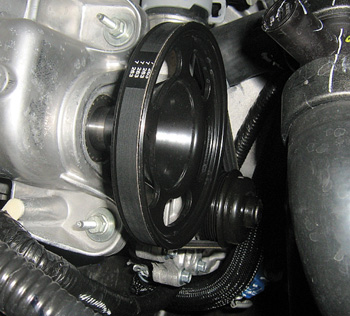 Adjusting Your Belt
There is no adjustable power steering tensioner on the 3.5L. The 3.5L uses what is called a “stretch belt.” This belt is slightly elastic by design. It is removed and installed by rolling it off and rolling it on. This belt cannot tolerate lubricants, so do not spray these belts with any kind of ­lubricant or dressing.

Note: The V6 uses a cam-driven water pump at the rear of the left cylinder head.

Marker Lights Trick
Located in the forward side of the front inner fender is an access panel through which you can replace the exterior marker light bulbs.

Cool Down
When servicing the A/C system on these vehicles there are a couple of things to note about the condenser. The top two rows in the condenser are the power steering cooler. This similar idea is also used in the newer Escapes, however, in the ­Escape, these upper rows are the transmission cooler. 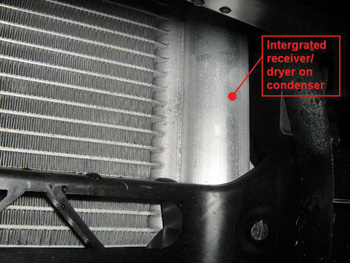 These vehicles are optional with heated and cooled seats. The seat cooling is achieved by use of a Thermal Electric Devise (TED).

This is not just simply piping A/C vent air into the seats. Instead, a TED is a series of semi-conductors that can absorb and transfer heat. Inside the seat are a fan, tubing and a TED.

The TED has a filter under the seat that is to be replaced every three years or 36,000 miles. To replace the seat filter, adjust the seat all the way back, push up on the plastic out-ring of the filter and rotate until it unlocks.

Tools: Magnetize Your Pegboard with Magna-Peg