Almost any part can be coated, but just because you can doesn’t mean you should. There are various types of coatings and choosing the right process for the right parts is one of the biggest keys to making more power and increasing component life.

Outside of the engine building community, people think of coatings  and think of something dipped in chocolate and rolled in candy. For us it’s a little different, especially with engine coatings – even though it may be candy to your engine parts business. So let’s just clear this up right now: there is no caramel, chocolate or even coconut shavings involved in the makeup of any known engine part coating. 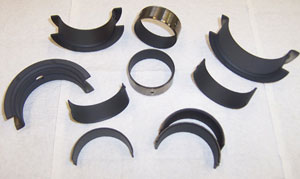 Engine builders who hear the term “coating” probably think it’s something out of NASA or Formula One, which is not really much of a stretch, but today’s coatings have made themselves more accessible to the regular Joes out there. Coating experts say that many coatings are affordable to the grassroots racer, which should make the job of selling it to your customer easier.

The biggest benefits engine coatings provide are somewhat intangible. Peace of mind is one benefit you’ll hear a lot when you talk to coating companies. Insurance is another one that comes to mind. But the tangible things coatings do provide are measurable: lubricity to moving parts, heat management for components that are exposed to high heat and friction reduction for increased engine efficiency, which all result in longer component life.
Almost any part can be coated, but just because you can doesn’t mean you should. There are various types of coatings and choosing the right process for the right parts is one of the biggest keys to making more power and increasing component life.

Dry Film Lubricants
A dry film lubricant is most commonly applied to engine bearings and piston skirts. “It is primarily used as an insurance policy in the event of oil starvation, loss of an oil film or a dry start where the oil has run off the crankshaft and the bearing,” says Chad Elliot, H.M. Elliot Custom Precision Coatings. “You’ve got a protection layer there that helps prevent bearing and crankshaft wear. It reduces friction on the bearings as well.”

Elliot says his company’s dry film coating contains several ingredients including Moly-disulphide. “Moly is the primary ingredient but it’s a blend of several things that make it what it is,” says Elliot. “There are some special preparation processes that go into it that make the coating adhere to the bearing. The big thing is (and we make the coating ourselves in the shop), it’s a wetting Teflon coating. The difference between that and a non-wetting Teflon is that oil won’t stick to the part. Because it’s a wetting Teflon, oil will stick to our coating and not run off. It’s like a good wax job on a car, or if you put oil in a Teflon pan you can see a similar effect. The oil won’t stick, it usually will just bounce around instead. That’s our primary coating, and we do thousands of these bearing coatings every year.”

Some of the other coatings H.M. Elliot does are for pistons. “We have two coatings that we use on pistons,” explains Elliot. “One is another special Teflon-Moly blend that we put on the piston skirts. It reduces friction and it’s an anti-galling-type coating, which reduces wear. Also on the performance side – if you put a coating on a piston you take up a bit of the wall-to-piston clearance. It helps the piston stand up straighter in the bore. It can result in less rocking, which leads to a better ring seal.” 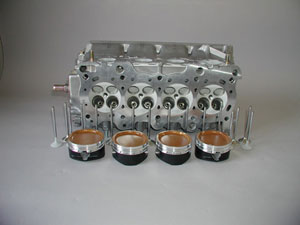 Understanding the differences between coating can, admittedly, be confusing. “Our lubricating coatings help with friction and to provide a solid film of lubrication,” says Richard Tucker of Swain Tech Coatings. “It’s actually a wet lubrication, and we coat a lot of piston skirts, rod and main bearings and sometimes valve stems and things. Some people call it a dry film and others call it a solid film, it’s the same thing but different term.

“We coat engine bearings with a dry/solid film lubricant. However, we have different coatings for different parts,” Tucker explains. “The coatings on the engine bearings are only about .0002” thick, so it would be very unusual to adjust your clearances for that. The coating we put on piston skirts is a little over or under .001” thick. Usually the diameter grows by about .002”. When we first started doing this in the 1970s it was not a big deal to add .002” to a piston. Most motors were set up to run in the .006”-.008” range and a race motor was in the .004” range in piston to wall clearance. But today, things have changed a lot. Some motors are set up with only .001” clearance to start with. In those situations you would have to add a little clearance back for the skirt coating.”

“We can do a thermal coating in black or in what’s called burnished silver,” says Elliot. “It’s white and then we burnish it. It gives it extra durability but it also looks good. The whole idea of doing the exhaust system is when you do them inside and out, the gases escape faster, which gives you more power. It improves the efficiency and breathes better.”

Coatings have changed a lot from when they first began being used in the 1970s according to coating suppliers. “From both a material standpoint and the level of knowledge about coatings, we’ve seen big changes,” says Swain Tech’s Tucker. “Back when my father-in-law started this, he was an asphalt racer and a ceramic engineer who wanted to bring those two things together. He was working for a company that primarily produced solid ceramics for wear applications and he recognized the value of ceramic thermal barrier coatings at that time. So through that company he was offering coatings to racers such as Junior Johnson and Cale Yarborough to help develop the technology. The company he was working for was used to selling thousands of ceramic parts at a time, however, and as the ’70s ended and the ’80s began thought it was too cumbersome to deal with little individual race teams. It wasn’t a good fit for them, so he started his own company that became Swain Tech Coatings in 1981.” 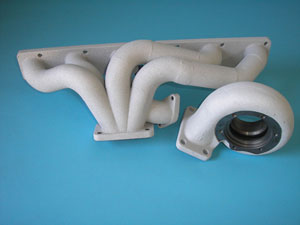 We think the the ceramic coating on the dome of the piston is even more important than the skirt coating,” explains Elliot.

Thermal barrier coatings are typically about .001” to .003” thick, and help protect the pistons. These coatings are ideally suited for supercharged or turbocharged drag racing engines that run on short bursts, or on nitrous oxide. Nitrous produces a lot of heat very quickly, which can cause damage to unprotected pistons. Thermal coatings keep heat from spreading down into the pistons and rings, which may be counterproductive if the heat persists for a long period of time. That’s why several piston manufacturers do not recommend a thermal barrier top coating on pistons for naturally aspirated engines (without nitrous) or ones that are built for endurance racing. On these kind of applications, you’re probably better off without it.

Diamond-like Coatings
Another type of coating that is being used is a diamond-like coating which, while not really diamonds, does have some of the same characteristics. Bekaert’s DLC coating stands for just that,  Diamond-Like Carbon, meaning that the coating takes on some of the properties of diamonds but not all of them.

“If it were really diamonds it would probably be too hard and cause wear on the counterpart,” says Bekaert’s Mark Boghe. “The structure of the carbon atoms of DLC is between diamond and graphite. That also explains the main properties of the coating. It is very good against wear resistance because of the hardness and the property is close to diamonds. It also has low friction properties, which you can find in graphite, too. By reducing the friction you also reduce the wear.”

Again, like a certain popular candy. High hardness to increase the wear resistance, and then low friction properties, which obviously reduces the friction of the components in contact with each other. Great properties apart – even better together.

Boghe says everything started for Bekaert with Formula One, and then the company moved into NASCAR applications. However, Boghe is quick to dispel the myth that coatings are only used by OEMs and Formula One Teams. “Our company may be pretty big, but our coating operation is really a service business. We get parts in from the customers and we apply the coating and give them back. We started with doing a couple of pieces on camshafts, a couple of valves. It’s not like we are dealing with big manufacturers all the time. We also deal with smaller teams and small volumes.”

While it can be expensive to coat parts, it is not as expensive as replacing high dollar camshafts or cranks. Parts can often be recoated before you wear off all of the old coating. “Not all parts can be recoated,” Boghe cautioned. “But if it’s possible we can often decoat or strip a coated part and recoat it again, many times without any additional machining or polishing. That’s something we are seeing more and more of because some of these parts, such as camshafts, can be pretty expensive. Properly coated, you may not need to buy that new cam or have the profile reshaped.”

Camshafts are typical of the types of components Boghe says are being be reused. Other parts, such as lifters, tend to be used too far past when the coating wears off. You can extend the life of the component as long as it comes down to increasing the wear resistance of the surface. Coatings may reduce the wear of a fatigue item but there is a limit to everything.

How long does it last? “It’s difficult to put a number on that,” according to Boghe. “We’ve seen some NASCAR teams use our coated lifters for several races for instance. Then again, not every race is the same. It’s difficult to say how many laps or races you’ll get. We have seen some lifters being used over five races.”

Coating experts say that customers for coated engine parts are coming from all over the automotive spectrum. While there is not one particular profile of a customer, the one thing they all have in common is the need for protection against wear and a gain in performance. While it is an extra expense to add an engine coating to your next engine build, it may be a good time to ask the fast food equivalent of “do you want to supersize that?”