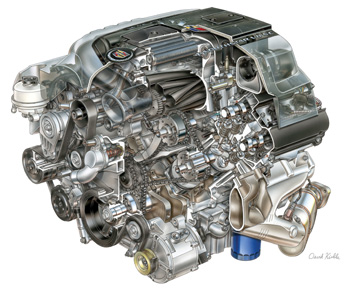 Initially rated at 295 horsepower, the Northstar V8 has grown over the years to an incredible 469 hp at 6,400 rpm (STS-V Supercharged Northstar engine).

Like most other engines, the Cadillac Northstar 4.6 V8 has evolved over the years. In 1994, the first Northstar V8 (L37) was joined by a second version (LD8) with a different cam profile that lowered peak horsepower slightly to 270 hp but increased torque output in the lower rpm range for improved throttle response and quick acceleration. That same year, GM introduced a downsized and somewhat less powerful version of the original Northstar V8 into its Oldsmobile Aurora.

However, in 2005, Cadillac engineers gave their Northstar a boost when they introduced a new 4.4L Supercharged Northstar V8 engine and GM’s new Hydra-matic six-speed automatic transmission. The official power ratings for the 2006 STS are 469 hp at 6,400 rpm and 439 lbs.-ft. of torque at 3,900 rpm. 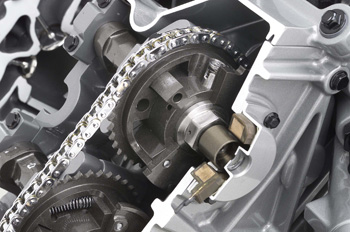 The automaker said that the Northstar V8 supercharged engine represents the most output ever for a production Cadillac. In fact, during the final stages of development, GM Powertrain engineers found more opportunities to push the boundaries of the Supercharged Northstar engine.

The Supercharged Northstar V8, which also powered the V-Series edition of the XLR luxury roadster, generated more peak power for the STS-V, compared to the XLR-V, due largely to the greater underhood space of the STS that allows more induction and exhaust capacity. On the other hand, the XLR-V will be a quicker car than the STS-V, given its superior power-to-weight ratio.

However, according to GM, that engine is no longer available for new Cadillac models.

And, while the 4.6 Northstar did make it into Cadillac’s 2010 models (DTS and CTS), it is unsure how long this engine will shine in the automaker’s lineup. As automakers look toward more turbocharging of six-cylinder engines as a way to reduce fuel consumption in larger vehicles, the Northstar may be on the verge of burning out. 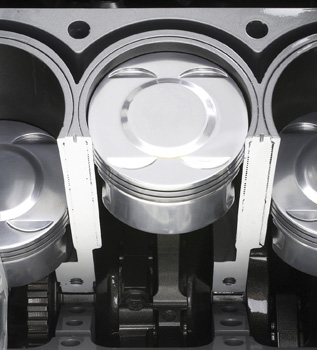 Northstar’s Unique Engineering
The Northstar V8 has a die-cast aluminum 90° block with a bottom end girdle that splits along the midline of the crankshaft bearings. This takes the place of the main bearing caps. For model year 2000, GM began using a new high pressure “squeeze” casting process for the lower crankcase to reduce porosity in the aluminum, which may allow oil to seep through and leak (this has been a problem on some engines).

The cylinders have cast-in-place iron cylinder liners that are not replaceable. Compression up to model year 2000 was a relatively high 10.3:1. It was lowered to 10:1 in 2000. Each head has two camshafts (one intake, one exhaust) and four valves per cylinder (33 mm intakes and 29 mm exhausts).

Direct-acting hydraulic lash adjusters are positioned over each valve. The overhead cams are all chain-driven, and use an intermediate chain sprocket under the front cover to connect to the crankshaft. Three separate hydraulic tensioners are used to keep the cam chains tight.

The Northstar V8 is an interference engine, which means if a chain fails or is disconnected when the engine is cranked over, the valves will hit the pistons. That’s something techs don’t want to happen with an expensive engine like this!

Finally, the intake manifold is Nylon 66 thermoplastic, which its engineers explain that this helps cool intake air by conducting less heat from the engine. 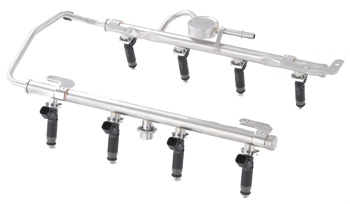 If the fuel pump relay fails on a Northstar V8, the engine should still run because the fuel pump also can be energized through the oil pressure-sending unit.

Both crank sensors are mounted in the block and the cam sensor is located on the rear head in front of the exhaust cam. There’s also a knock sensor on the rear head between cylinders 1 and 3 to retard timing if detonation becomes a problem under load. 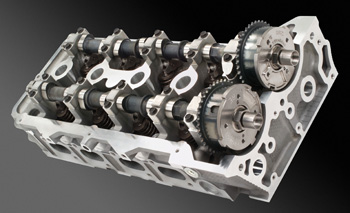 The engine continues to run (essentially a limp-in mode) but with reduced performance.

In model year 2000, the DIS ignition system was changed to a coil-on-plug design, which eliminates the spark plug wires and waste spark. Each head has its own ignition module that fits in the middle of the valve cover.

Another unusual feature you may see is a liquid-cooled alternator on the DeVille and Seville. Cadillacs are crammed with electrical accessories that put quite a load on the charging system, so using liquid cooling helps prolong the life of the alternator. In 2001, GM went back to an air-cooled alternator to “eliminate the coolant tubes and potential leak points.”

Later updates to the engine included variable valve timing (VVT), which GM engineers said can vary the intake valves by up to 40° and the exhaust valves up to 50° in order to increase power output. However, the VVT system was designed for the longitudinal LH2 engine and not for the transverse front-wheel-drive (FWD) engine.

GM explained that horsepower output on the FWD engine was already maxed out and adding the VVT feature to it would create excessive torque-steer issues.

Did You Know…
Another feature of the Northstar engines is a “limp home” mode that allows the engine to continue running if all the coolant is lost. If the PCM senses an overheating condition, it temporarily disables up to half of the cylinders. This pumps enough air though the engine to keep temperatures from getting hot enough to cause any damage. Even so, GM says the vehicle should not be driven more than 50 miles in the limp-home mode. 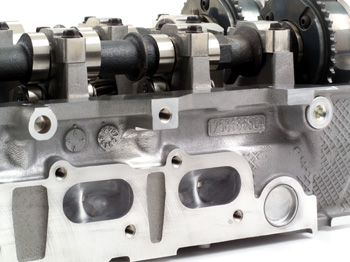 Northstar Maintenance
One of GM’s goals with the Northstar program was to reduce maintenance to a minimum. The engines are factory-equipped with 100,000-mile platinum-tipped spark plugs and five-year/150,000-mile Dex-Cool antifreeze, and use chain-driven cams to eliminate the need to replace timing belts. Except for oil and filter changes, there isn’t much to maintain — unless something breaks.

The newer Northstar V8s use an “oil life monitor” light rather than a specific mileage interval or service schedule to indicate when oil changes are needed. The PCM tracks engine rpm, operating temperature, load, running time and ambient temperature to calculate oil life.

Up until 1999, the maximum oil change interval under ideal conditions was 7,500 miles. In 2000, GM bumped the upper limit to 10,000 miles. In 2002, they did away with the upper limit altogether stretching the oil change interval to 12,000 miles or more, depending on operating conditions. However, GM does say the oil should be changed at least once a year regardless of mileage.

Note: When changing oil on a 4.6L Northstar V8, keep in mind that this engine holds 7.5 quarts instead of the more common 4 or 5 quarts.

Service Issues
While the Northstar V8 is well engineered, like other engines they’ve had some problems. According to various sources, head gasket failures are not uncommon. Nor is oil burning or oil leaks.

• Cadillac service bulletin 01-06-01-011 deals with oil burning on 1996-’99 Northstar V8s. The cure, says Cadillac, is to do a ring cleaning procedure (seems those long oil change intervals weren’t such a good idea after all). Cadillac recommends using GM cleaning kit (P/N 12378545) and Kent-Moore J-45076 induction/evacuation tool to do the job.

• No oil pressure on a 1993-’94 engine? Debris between the oil pressure relief valve and its seat will prevent oil pressure buildup. The cure here is to clean or replace the pump (P/N 3543258), which is located on the front of the engine.

• In 1995, GM revised the original crankshaft balancer to provide smoother operation and longer durability. If the balancer is removed from the crankshaft for any reason, GM recommends installing the newer, improved balancer (P/N 12552437 or 12552436, depending on the engine).

Because the Northstar V8s are aluminum, thread damage is not unusual. GM’s recommended thread repair kit is J42385-500 for main and head bolts, and J42385-2000 for other fasteners.