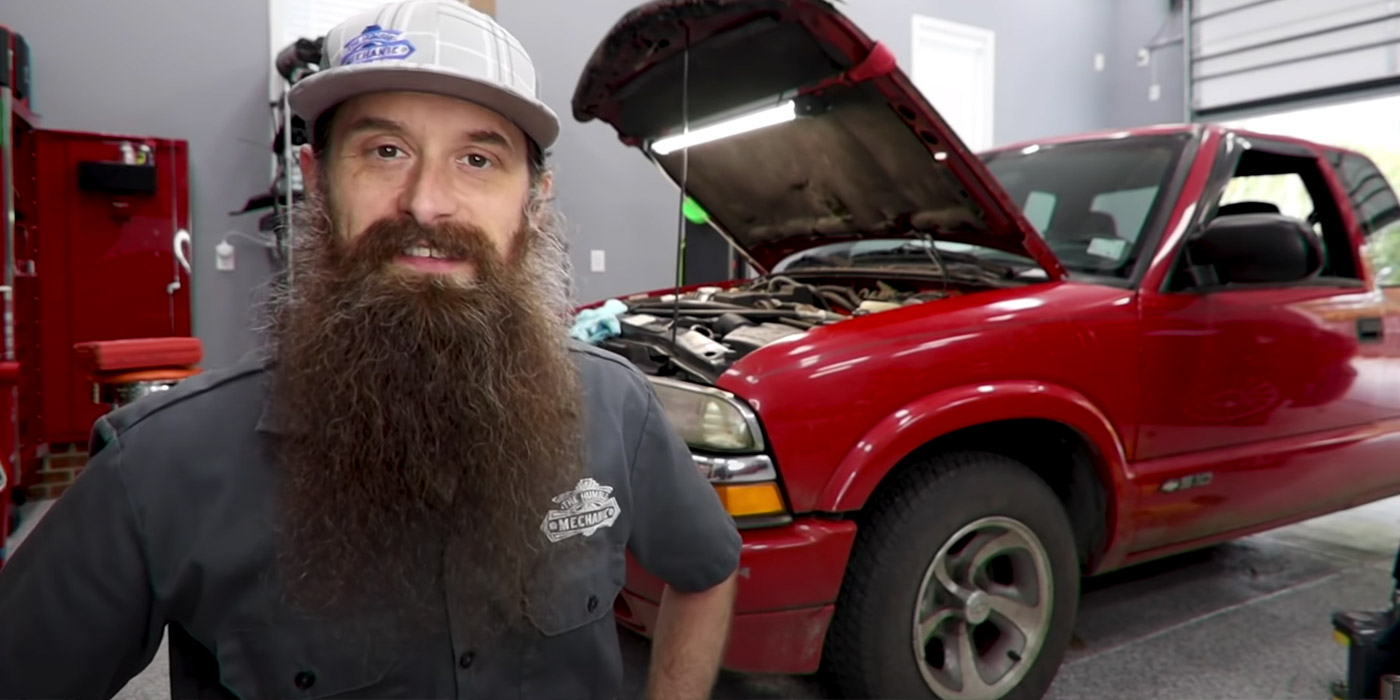 Charles helps out a friend whose S10 has been overheating. He takes a look at the coolant, which is “all kinds of wrong.”

Recently, super-good friend of the family was having some overheating issues with their 1999 Chevy S10 four-cylinder truck, so I offered to help them out and take a look at it.

In addition to overheating, the car had a leaking radiator and the thermostat was sticking. A local shop had diagnosed it with a bad engine. That’s an awful deep way to go right off the bat, so rather than just going all-in on the engine, they put in a new radiator and thermostat, but the car is still overheating.

Let’s walk through what’s going on — I have checked a couple of things and I’m basically convinced that it’s a leaking head gasket, but rather than rolling the diagnostic dice, we’re going to do some more testing and make sure we’re at least in that ballpark. We may not be able to determine whether it’s the gasket or the cylinder head without disassembly but we’re going to get a lot closer than “it needs a whole engine.” And we’ll see if my quick tests that I did when the car first rolled in were right or if I was just ready to load up the parts cannon and fire away.

The first thing we want to do is confirm the car is overheating. I don’t actually want to get this car up to temperature yet, so for better or worse, we’re going to take the customer’s word for it. It would be a solid idea though to quickly make sure that the fans are coming on.

There are a couple of pretty common symptoms when we talk about a failing head gasket. I mentioned overheating as a concern this customer had, that’s one of them. Another one, which the customer also had, is white smoke coming out of the exhaust that has kind of a sweet smell. You might also experience misfires — that’s coolant entering the cylinders, causing a disruption in the proper combustion process and then getting blown out the exhaust, which then leads to our white smoke. There are probably other things that a head gasket can do as well, however, those are the most common.

I’m going to start with a couple of basic checks. We know the radiator was replaced, so let’s take a look at the coolant. Also, something else that can happen when head gaskets leak is oil and coolant can mix together in the cooling system or the crankcase, so we’ll check the coolant and the engine oil.

Let’s move over to the coolant reservoir side. I can see that it’s this reddish/brownish color coolant — definitely not good. I’m also inside this reservoir smelling exhaust gas. I grabbed a baster and pulled some of the coolant out to do a better evaluation of it. As you can see in Photo 2, this color is all kinds of wrong. They may not have done a coolant flush when they replaced the radiator but draining the radiator drains the majority of the coolant out of the system. The radiator and thermostat were replaced probably within a thousand miles and if we shine a light up underneath it, you can see deposits floating in the coolant.

Next I’ll check our engine oil. Oftentimes when coolant and engine oil are mixed together, the oil gets this milkshake type of consistency and color, and unfortunately that’s what we’re looking at here. Not awesome at all.

Photo 3 shows what’s happening as I pull a bigger sample of this oil so I can do a better job of examining it. Not only does it stink, but that’s milk-shaky goodness. Photo 4 shows the chocolate milkshake syndrome. Now as bad as this looks after pouring it into the cup, it’s actually worse than that. I’m assuming there’s a little bit of regular oil at the bottom of the extractor, so this is actually really, really bad.

We’ve got nasty oil, we have low coolant, nasty coolant, we’re getting white smoke and the car is overheating — all pretty much signs of a failing head gasket. Keep in mind, just because you have oil and coolant mixed together does not mean it’s a bad head gasket. There are other places that oil and coolant can mix, such as oil coolers, which was actually a really common VW problem.

Now that we know we’re going down the path of a head gasket, there are a number of tests you can do. The fastest, easiest and cheapest one is using a combustion leak detector. This tool is actually a pretty neat one to have. The cylinder has a Schrader valve inside of it so the (leak indicating) fluid can’t get into the radiator. We’ll pull air up through the cylinder and if there’s combustion gas in it, it’ll change the color of the fluid.

With our engine cold, we insert the testing cylinder right into our radiator, see Photo 5. As I use my vacuum hand pump to draw up the air, we see a bubble, so that means it’s working; I’m pulling air through. Next I’ll start the car and let it idle for about 10 minutes. Of course, make sure you’re working in a well-ventilated area.

After letting the truck run for about 5 minutes and then pulling vacuum through our tester for about 2 minutes, as the instructions say, the fluid turned yellow. It was blue when we first started and now it’s a pale yellow as you can see in Photo 6. I really like this combustion gas tester. It’s a great test to run, and it’s super-fast.

Now, what we haven’t determined though is do we have a bad head gasket only or do we have a cylinder head that is warped, or even a block that’s warped? That’s not something we’re going to know until we do a full teardown.

There are also other ways that we can determine whether or not we have a leaking head gasket. Combustion gas leaking into the coolant is only one type of failure. Something else we could have done was pressurize the cooling system or maybe remove the spark plugs to see if we’re getting coolant into the cylinders We could also do a cylinder leak down test and see if we had air rushing out of the radiator or coolant reservoir. I think in this case though, we pretty much got it nailed, so no sense in doing any further testing until we get the head off then we’re going to take a straightedge and take some measurements.

Something else that we want to keep in mind when we’re talking about making this repair is going to be what is some of the consequential damage potential? How long has this been going on in that coolant mixed with oil? When coolant is mixed with engine oil, it’ll reduce the lubricity and the lubricating properties of the engine oil so we might actually have more damage than just a head gasket in the form of damage bearings or what not. It’s going to kind of be up to the customer how deep we really want to go.

So we have sad coolant, we have sad engine oil, we confirmed that we have a leaking head gasket … what’s next for this truck? I’m not really sure. I have to go deliver some bad news. TS