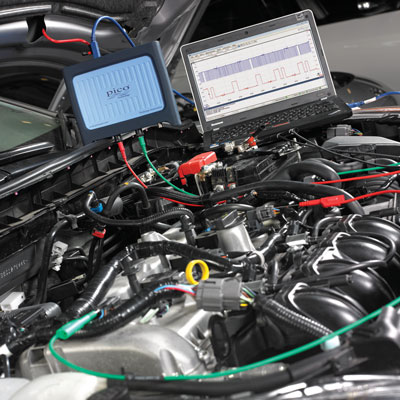 Intermittent problems have no place to hide thanks to the combination of a 250 million sample memory and comprehensive triggering functions. The powerful zoom functions allow you to have the best of both worlds: high speed and long capture times.

Pico Technology has launched the next generation of Automotive PicoScopes with a host of exciting features and has again managed to massively improve the performance but keep the same price. The new scopes are available as 2-channel 4225 and 4-channel 4425 options, and are supported by a complete range of kits to allow a shop to earn money from their PicoScope right out of the box.

The previous PicoScopes were already fast enough to capture CAN and FlexRay signals but, according to the company, the PicoScope 4425 is five times faster, at up to 400 million samples per second to protect your investment for many years to come.

Intermittent problems have no place to hide thanks to the combination of a 250 million sample memory and comprehensive triggering functions. The powerful zoom functions allow you to have the best of both worlds: high speed and long capture times.

The 4425 boasts an input voltage range of ±200V to handle increasing injector voltages without the need for attenuators. As with all 4000-series PicoScopes, signals are captured in 12-bit resolution, 16 bits in enhanced mode, with ±1% accuracy.

A major innovation on the 4425 is its independent floating inputs; think of it as four separate single-channel oscilloscopes in a box all sharing the same timebase and control. This means that all inputs can be used in differential mode (e.g. CAN-H and CAN-L signals), or across non-grounded components such as 12V injectors or for voltage drop testing using a single input.

The 4425 also introduces a new user convenience function with ConnectDetect. This handy feature detects when you have made a good connection in those difficult-to-reach places, displaying the connection status on your screen and on the front of the unit.

The 2-channel 4225 model has the same memory and performance but, with just two channels, offers a lower cost to fit any budget. PicoScope can pay back on just one job by helping to verify that you have diagnosed and fixed the root cause problem first time.

“The existing 4423 has been on sale for five years and remains the market leader both in terms of sales and performance,” says Alan Tong, managing director of Pico Technology. “Before starting on the new design we asked thousands of users for ideas and suggestions on how to improve. We were also able to use our close relationship with many of the world’s leading vehicle manufacturers to look into the future and the new technology that will be used on vehicles still at the design stage. This has helped us ensure the new 4425 has been future-proofed for many years to come.” To ensure that the 4425 will make the most of recent PC technology improvements, it supports USB3 for the highest-speed screen updates and waveform saving.

Users of the existing 4423 and the previous 3423 PicoScopes can receive free software upgrades to ensure that every PicoScope becomes more powerful long after it has been purchased.

The Next Generation of Automotive Oscilloscopes from Pico Technology