For the past five or so years, suppliers of nitrogen-inflation equipment have made serious claims. Compared to moisture- and dirt-laden compressed air, nitrogen – a dry, inert gas – runs cooler, does not permeate through rubber as quickly and does not cause rust to develop on steel cords, expensive wheels or tire pressure monitoring sensors. The result is better fuel economy, more consistent inflation pressure, longer tire life and increased safety, advocates say.

Those are big claims, so it’s only natural for tire dealers, commercial fleets and consumers to be skeptical. As the old saying goes, “The proof of the pudding is in the eating.” Real results are what count. 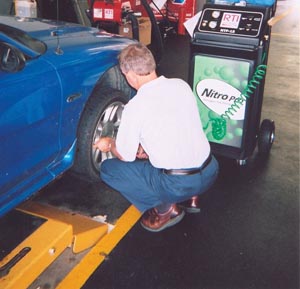 However, recent trends suggest it might be time to take the plunge. “Close to 4,000 dealers in the U.S. are offering nitrogen service,” claimed Brian Brasch, president of Branick. “That includes a mix of big-box retailers, car dealers and tire dealers.”

“It is a profit center now,” added Phil Giallombardo, national sales manager at Branick, who says that more than one million tires today are inflated with nitrogen. The green valve cap is quickly becoming the industry standard for identifying nitrogen-filled tires, and, Giallombardo said, “There are a lot of green caps around the country.”

There is evidence to support Whitt’s claim. Surveys by Branick of its retail customer base show that 50% to 68% of consumers are being successfully converted from compressed air to nitrogen.

Ashok Mathur, business manager for UltraFill systems at Air Products, said conversion rate among his distributors is approximately 50%. “Tire dealers are more guarded…conversion rate is about 20%,” he said. However, “those dealers that have adopted UltraFill are generally very happy with the profits they are making and the positive feedback from their customers. I think a critical mass of dealers and consumers now are aware of nitrogen,” Mathur continued, “and we are at or near a tipping point in adoption.”

Even ROI-driven trucking fleets are starting to look at nitrogen with open, yet still skeptical, eyes. “It’s time [for fleets] to consider this possibility,” said Ryan Lang, commercial portfolio manager of air solutions at Ingersoll Rand. “Multiple tests have been performed with fleets that prove the value in tire-life increases, fuel-economy savings and reduced downtime due to failures. The facts are there; it’s just a matter of time before adoption takes place.”

“We believe there are significant benefits to be achieved in commercial trucking and are pursuing that market,” agreed Mathur.

“The fleet segment stands to have the biggest bang for the buck of anybody,” said Lee Mays, marketing director for reciprocating products and accessories at Gardner Denver. He points to the potential savings in both fuel and tire costs – the two biggest operating expenses for fleets – that nitrogen can offer. “Fleets are testing nitrogen in specific areas of the country,” said Mays. “They have been very slow to adopt it, but we will start to see more interest from trucking companies.” 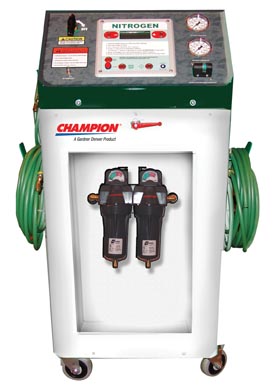 “It won’t be long until most dealers will be offering nitrogen,” added David Marsh, chief marketing officer at D. Marsh Co. Inc., supplier of NIflate99 systems. “Every reputable dealer will have to offer nitrogen eventually. Competing dealers could drive down the prices and eliminate the profit. Dealers that buy machines before that happens will get top price for their nitrogen, pay for their machines in a few months and earn thousands in profits the first year.”

“Those who are first on the block will have their equipment paid for early and get more aggressive in their approach,” Giallombardo said.

So, what exactly is the right approach for an independent tire dealer? How can a dealer maximize return on investment and get the most profits while the getting is good?

Over the Learning Curve
Most nitrogen experts agree that educating customers is the first and most important step to becoming profitable selling nitrogen services. Many dealers, still wary of nitrogen, argue that consumers aren’t asking for it. But, maybe they aren’t asking for it because they simply don’t know about it or don’t understand the potential benefits.

Amanda Summers, marketing manager of communications and research at RTI Technologies Inc., says that “more and more customers have now heard of the service; they just do not know all of the benefits offered.” Still a relatively new service to the average consumer, “education must be a part of selling the service,” she said.

Service and tire technicians can be an independent tire dealer’s best resource for educating consumers, said Mays from Gardner Denver. “Technicians can be the biggest sellers of that product,” he said. “Customers will listen to the service technician, who can also offer alignments and other services.”

Lang from Ingersoll Rand agreed. “Shops that have the ability to sell from all areas of the shop are the most effective in selling this technology,” he said, and recommends that dealers train technicians thoroughly to ensure they can speak to customers about the benefits of nitrogen.

To help advance both dealers and consumers over the learning curve, in 2005, Branick’s Brasch founded the Denver-based Get Nitrogen Institute, a non-profit group that provides information to consumers and dealers about the benefits of nitrogen inflation. Parker Hannifin and Ingersoll Rand joined Branick in the educational effort, and the three suppliers each have a one-third controlling interest in the venture. Sponsors include Gardner Denver, Costco, Myers Tire Supply, Tire Retread Information Bureau, Tire Service Equipment Manufacturing Co. and Haltec Corp.

The Get Nitrogen Institute maintains a subscription-based website – at getnitrogen.org – that features numerous educational and training materials, scientific studies and sales tips for dealers, as well as a tool for consumers to search for dealers that offer nitrogen. A dealer that purchases equipment from one of the members is listed free in the dealer locator for six months and thereafter pays an annual listing fee, according to Brasch.

Pricing and Sales Approach
As with any new business offering, setting price points and sales strategies for nitrogen service is a highly individualized decision, based on a myriad of factors, including regional area, competitive landscape and business philosophy. However, a look at some of the various practices that seem to be working now can give a sense of the possibilities later.

Price points for nitrogen service vary wildly; tire dealers are charging anywhere from $2 per tire to $45 per vehicle. “One of our customers in California charges $34.95 for cars and $44.95 for trucks,” said Marsh. “However, $6 per tire for cars and $10 for trucks is common elsewhere.”

“It really depends on the required ROI timeframe and the demographics of the area,” Lang explained. “As a rule of thumb, we tell our customers to charge anywhere from $2 to $10 per tire, depending on the customer.”

RTI Technologies offers an ROI worksheet online at rtitech.com that helps dealers determine pricing. “They can plug in different numbers, including technician wages and how long it takes to do the service,” said Summers. “Then, the calculation shows them different profit numbers, depending on their entries.”

Sales strategy fluctuates as much as price; there are many different ways to offer nitrogen service. While some dealers sell nitrogen service separately, others build it into the price of a new tire. Still others give nitrogen fill away as a value-added service. “This dealer approach is designed to create customer loyalty and bring that customer back frequently so that additional services may be offered,” stated Whitt.

“Some see nitrogen as a large new revenue source,” said Mathur. “Others use it for customer retention, and many do both. The focus could be on new revenue stream, customer retention, expanding customer base, packaging it with other profitable offerings or a combination thereof,” he said. “In any of these cases, we believe the dealer should be able to get a three- to six-month payback on a complete installation.

“We recommend dealers initially start with an attractive promotion to get quick attention and later change to an offering more focused on their ultimate business model,” he added. Mathur says many dealers are offering nitrogen free with new tires and charging $5 per tire for conversion from air to nitrogen.

Bundling nitrogen with other services appears to be a very popular option among dealers. “When there is hesitancy on the part of the consumer, there is more bundling,” said Gardner Denver’s Mays. For example, “a dealer might sell an oil change at full price and then offer nitrogen at half price. Another dealer may do an alignment and then throw in a nitrogen fill.”

“A dealer can either use the service as an add-on and charge a fee or offer the service for free if a customer inquires about another service or wants to buy a tire package,” said Summers at RTI Technologies. “It is a great add-on service, which can be offered any time a customer is scheduled for other services.”

“Nitrogen is a profitable add-on sale,” said Marsh, “but an even more important consideration is that nitrogen also builds customer loyalty and return business. When customers need to have their tires topped off, they’ll most likely return to the dealer that installed the nitrogen. Most of my dealers offer free top-offs to their customers. It takes only seconds, uses very little nitrogen, and barring a tire leak, top-offs generally last from one oil change to the next,” Marsh said.

“The best possible plan,” Whitt from Schrader-Bridgeport suggested, “may be to offer nitrogen bundled into the ‘enhanced’ profit of the tire at new-tire installation, while charging for nitrogen at tire rotation or other services like alignments, brakes, etc.”

Branick’s Giallombardo also supports bundling. “Those that are getting a premium for nitrogen fill are adding other services to it,” he said.

Regardless of how nitrogen is priced and sold, experts agree it’s best for dealers to get into the market early while they can still charge a premium. “Dealers that want to maximize their profits from nitrogen can’t afford to wait until every other dealer is also selling it,” said Marsh.

“Nitrogen is a proven revenue stream and profit source with minimum investment,” Whitt said. “We are truly living in an age of rapid technological advancement in which consumers are more aware and more willing to take advantage of anything that saves them time, effort and money.”