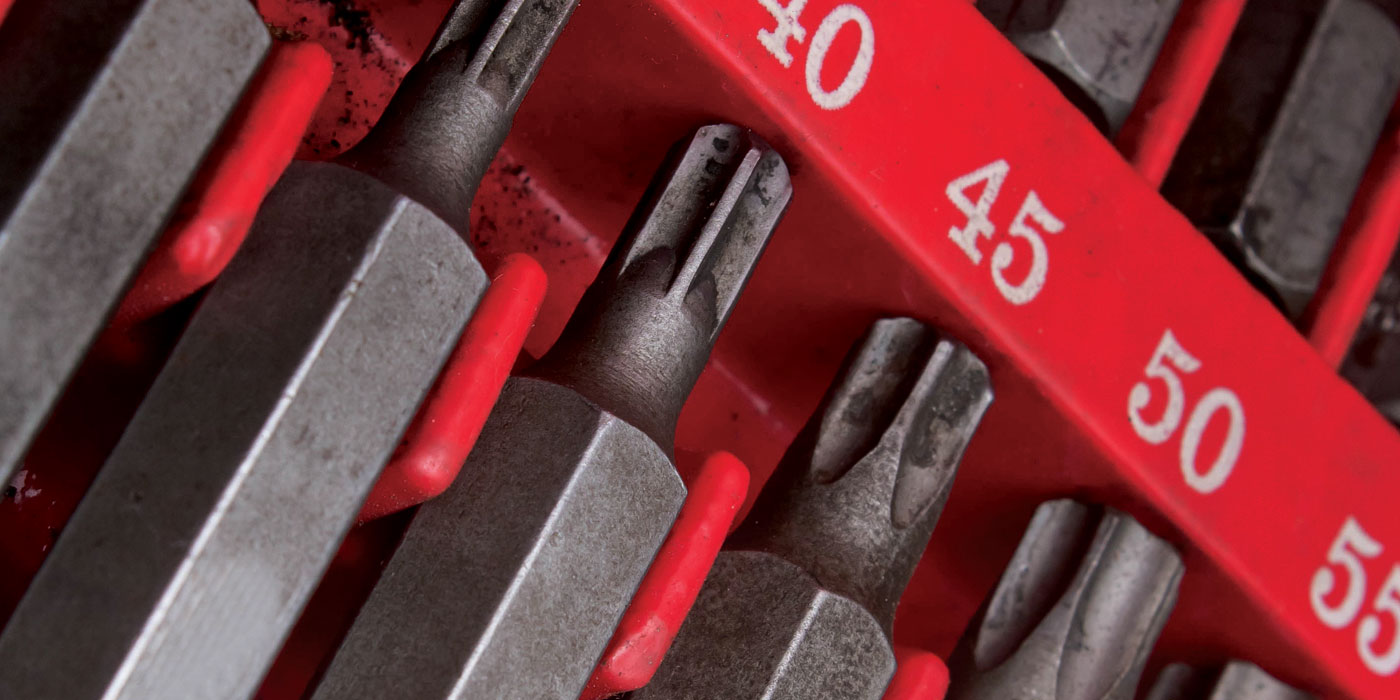 On The Tool Truck

Why are there different kinds of Torx bits, and is there a reason for it?

No time to read this article? Listen to it instead!

Listen to “On the Tool Truck” on Spreaker.

This is a common question, and there is a reason for the different kinds of Torx bits. The original Torx style of drive was invented and developed in the late 1960s with the intended purpose of eliminating cam-out, a frequent problem with the most common type of screwdriver at the time, the Phillips.

The Phillips drive and its tendency to cam-out under torque was, in fact, claimed at one point to be an intended feature of the design for limiting torque during installation. Unfortunately, not only was it inconsistent, but it could cause damage to the fasteners and the drivers. The Torx bit was designed to prevent cam-out, allowing the use of torque-limiting screwdrivers and equipment and ultimately meeting the increased demand for accuracy in manufacturing.

In addition to the anti cam-out advantages of Torx versus Phillips, you can also apply more torque than you can with a hex-bit (Allen) drive. The angle of contact between the points of a Torx bit and fastener are very close to perpendicular, which prevents the tendency to round-out, as is common with a hex-bit.

Although not the original intention, early on, the Torx fastener was itself a type of security device since very few people had the tools to remove them. As the use of the fasteners and eventually the tools became popular, the Tamper-Resistant Torx was developed with a post in the middle, preventing a standard Torx driver from being used and introducing a specific security feature.

Torx head sizes are indicated by the letter “T” and followed by a number that corresponds to the point-to-point dimension of the tip.

The Torx-drive design was also integrated onto bolt heads as an inverse of the original Torx. The correlating sockets to remove them are known as E-drive or External Torx sockets. The “E” designation is also followed by a number, but the numbers do not match those of the standard “T” sizes. For example, an E6 Torx socket fits onto a T30 Torx bit.

An evolution of the Torx-drive is the Torx Plus, which was introduced in the early ’90s. The points, or teeth, of these bits feature a squared-off design, which allows for higher torque and reduced wear. Also available as External Torx-Plus sockets, these are most common on 1999 and newer vehicles. It’s important to use the correct tools, because using a standard Torx for a Torx-Plus fastener may damage it due to loose fit.

The Torx and Torx-Plus as well as their tamper-resistant and socket-based counterparts are all very common, so eventually you’ll want to have a selection of all.

Variations of the standard bit or socket are Torx wrenches in the style of a traditional Allen wrench, and also Torx boxed-end wrenches. It’s not that often, but when you need one, you need one, and it’s worth it to have these on hand.

There are a couple obscure varieties indicating even more evolution of the design, but nothing that has taken a hold on the mainstream at this time. For the rest of them, your local tool truck driver will get you the quality tools you need to get the job done.

If you have a question for TechShop’s Tool Truck Driver, send an email to [email protected]. Your question could be addressed in the next issue of TechShop.

Advertisement
In this article:fasteners, Torx bits

On The Tool Truck: Floor Jacks

On The Tool Truck: Drill Bits

On The Tool Truck: Get a Bigger Hammer

On The Tool Truck: Punches & Chisels

Files
Connect with us