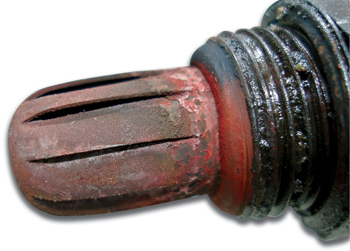 Oxygen sensors have been a part of the automotive maintenance scene since 1976, when feedback fuel controls were popularly introduced. By 1980, nearly every car and light truck was equipped with an oxygen sensor that allowed their computer-controlled fuel systems to operate in a “closed-loop,” “feedback” or “fuel control” mode.

Modern zirconia and air/fuel ratio (AFR) ­oxygen sensors last much longer because most of the above contaminants have been removed from gasoline, engine oil and gasket sealants. Since vehicles are being driven much longer, zirconia and AFR sensors most often malfunction because their internal heater circuits fail or because their zirconia-based sensing elements eventually lose their sensitivity to rapid changes in the engine’s air/fuel ratio.

OXYGEN SENSOR TERMINOLOGY
Oxygen sensor diagnosis requires an intimate knowledge of oxygen sensor terminology. The earliest version of the oxygen sensor was originally called a “lambda sensor,” because it could detect when an air/fuel mixture varies from an ideal 14.7:1 weight ratio. Ideally, 14.7 parts of air mixed with 1.0 parts of fuel will completely ­oxidize, leaving only water and carbon dioxide. The term “stoichiometric” describes the state in which chemically perfect combustion is achieved.

Photo 2: The coat of soot on this unheated oxygen sensor reduces its sensitivity to changes in the air/fuel mixture ratio.

HEATED OXYGEN SENSORS
During the early 1980s, many engines didn’t achieve fuel control (open-loop) until the coolant warmed to 160° F and the oxygen sensor warmed to 600° F. Since most exhaust pollution occurs ­during and shortly after a cold engine startup, oxygen sensors were later equipped with electric heaters to quickly bring them up to operating temperature. In modern vehicles, the PCM enters fuel control (closed-loop) as soon as the oxygen sensor begins sending a readable voltage signal to the PCM. Although operating strategies vary according to application, the PCM generally activates the oxygen sensor’s heater circuit during cold startups. Heated oxygen sensors generally last between 60,000-100,000 miles.

THE ZIRCONIA OXYGEN SENSOR
The sensing element of most oxygen sensors is composed of a zirconium dioxide thimble coated on both sides with a thin layer of platinum. As mentioned above, zirconia sensors must reach 600° F ­operating temperature before they begin generating a voltage signal. In addition, the inside of the zirconia thimble must be exposed to oxygen, which reaches the thimble through a vented housing or through the sensor lead wire. Although very little oxygen is required, a coating of engine oil or grease can reduce the availability of oxygen to the inner thimble enough to affect the sensor’s accuracy.

Photo 3: The shield on this new Toyota oxygen sensor is clean. If fuel control is correct, the oxygen sensor shield should accumulate only a light coating of combustion byproducts.

To more accurately monitor fuel control, the PCM in modern systems switches the air/fuel ratio from about 0.2 volts to 0.8 volts, which is very close to stoichiometric. This switching process can easily be observed by using the voltage-graphing feature found on most scan tools. In contrast to using a labscope, the graphing sample rate might be too low on a scan tool to provide absolutely accurate information. Nevertheless, the scan tool graph will indicate the voltage switching range and relative activity of the zirconia sensor.

When diagnosing any oxygen sensor, remember that outside air entering the exhaust system from an exhaust leak will obviously reduce an oxygen sensor’s indicated voltage output. It’s also important to know that oxygen sensors can become rich or lean biased due to problems like sensor contamination and faulty sensor grounds. Remember that, regardless of how well it tests, a biased sensor will not produce a stoichiometric air/fuel ratio. So, if the sensor is questionable, it should be replaced.

In many post-1996 OBD II systems, the zirconia sensor has changed from a thimble-shaped configuration to what is known as a “planar” or flat configuration. The planar design allows a much shorter warm-up time, is more reliable and is more accurate over its operating life. On most current platforms, zirconia sensors are used downstream from the catalytic converter because the voltage reporting requirements are within the range of a zirconia sensor. See Photo 4.

Photo 4: The locating tabs make this Toyota oxygen sensor application-specific. The four terminals indicate that this is a zirconia sensor.

TITANIA OXYGEN SENSORS
Just for the historical record, some manufacturers like Toyota used titania-based oxygen sensors to indicate rich or lean air/fuel mixtures. Unlike a zirconia sensor that produces voltage, the titania-based sensor is generally supplied with 5.0 reference volts. As a titania-based ­sensor heats up, it responds to variations from stoichiometric by changing resistance. Although the ­applications for titania-based sensors are relatively few, a technician must be able to recognize this configuration when a diagnosis is required.

AIR/FUEL RATIO SENSORS
AFR sensors are used in engines operating at ­extreme air/fuel ratios from 12:1 to 20:1 or higher. While AFR sensors are also known as “linear,” “broad-band,” “wide-band” and “lean” air/fuel ratio sensors, each of these design variations are generally application-specific and can generate a slightly different data stream.

Although an AFR sensor is basically two zirconia sensors or “cells” mated together in planar form, the AFR sensor uses an entirely different operating strategy than a conventional zirconia sensor. To remain within the scope of this article, suffice it to say that one cell is used to measure oxygen content in the exhaust stream and the other cell, known as a pumping cell, is supplied with a very small electric current capable of moving oxygen ions in a positive or negative direction. In so doing, this electric current achieves a stoichiometric ratio between both cells. The PCM therefore controls air/fuel ratio by measuring the amount of electric current flowing to and from the AFR sensor.

If you’re using a factory or “enhanced” scan tool, you’re likely to see AFR data displayed in an entirely different format than on an aftermarket tool. Many aftermarket scan tools were mandated to display AFR data in a conventional 0 to 1-volt switching pattern format.

While this format is erroneous in one sense, it also becomes irrelevant in another because modern OBD II PCMs have a much greater and far more sophisticated on-board diagnostic capability than just a few years ago. So, in most cases, it’s much better to let the modern OBD II PCM run the diagnostic monitors on the AFR sensor and store the related trouble codes when the AFR sensor begins to degrade.

Because AFR sensors can detect a wide range of air/fuel ratios in the feed gases exiting the engine, they are generally used upstream of the catalytic converter. Again, remember that leaking exhaust manifolds or EGR systems will create a false AFR signal to the PCM.

WHEN TO SELL OXYGEN SENSORS
Although it’s obvious that a new oxygen sensor is required when the PCM detects a failure, there are other occasions when an oxygen sensor replacement might be recommended. As mentioned at the outset, many older import vehicles are equipped with sensors that should be replaced at regular intervals or inspected when the vehicle’s orange “maintenance required” light illuminates.

Because pre-1996 OBD I vehicles lack the on-board diagnostic capability to detect a failing zirconia oxygen sensor, it’s always best to test sensor voltage range and sensitivity with a labscope or digital multimeter. When removed, the sensor shield should exhibit a nearly clean-metal ­appearance. If the sensor is crusted with oil ­contamination, it should be replaced and the engine tested for excessive fluid consumption.

Similarly, if an oxygen sensor has been exposed to coolant from a leaking cylinder head gasket, it should be replaced to ensure the PCM’s ability to establish correct fuel control.

Last, if the vehicle is failing an emissions test, remember that sensors can produce a biased voltage due to internal or external contamination, or a faulty ground connection. In any case, a questionable sensor should be replaced to ensure accurate fuel control.