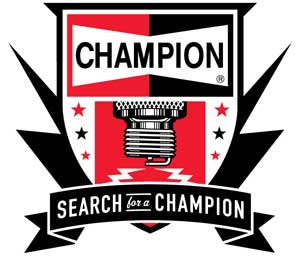 Grassroots drag racers Corey and Kyle Michalek of Ohio-based Michalek Brothers Racing are the winners of the $50,000 grand prize racing sponsorship in the Champion brand’s 2012 “Search for a Champion” video contest from Federal-Mogul Corporation. The Michalek Brothers team, based in Columbus and Canton, OH, beat out four other racers in the final round of judging, which included online voting at www.AlwaysaChampion.com as well as input from NASCAR Sprint Cup Series driver and Champion spokesperson Kevin Harvick.

One of the world’s most recognized and respected brands, Champion and its iconic bow tie logo today represent a broad portfolio of “Performance Driven” products, including technologically advanced Champion spark plugs; Champion oil, air and cabin air filters; Champion wiper blades; and Champion performance additives for the automotive and lawn-and-garden markets. Federal-Mogul created the “Search for a Champion” contest to connect these products with a new generation of consumers by encouraging grassroots racers to create videos that demonstrated their commitment  to winning in any of five engine-driven categories – asphalt, earth/dirt, snow/ice, water, and “other course.” More than 330 racers responded with carefully crafted videos, and more than 150,000 votes were cast on www.AlwaysaChampion.com.

“Sponsorships are the lifeblood of grassroots racing. I’d never be where I am today if it weren’t for the support of great brands like Champion,” said Harvick. “The folks at Federal-Mogul are showing that there’s no stronger advocate for today’s amateur racers. And that’s no surprise – I have relied on Champion spark plugs since I raced my first go-kart, and they’re powering our No. 29 Chevrolet in every Sprint Cup event.”

Corey and Kyle Michalek will campaign their 750-horsepower Champion Super Comp dragster in 10 NHRA and IHRA divisional events across the Midwest in 2012. When they’re not campaigning their own car, the brothers serve as crew members for Pat Dakin’s NHRA Top Fuel Dragster. They also apparently excel in video production, as their self-created two-minute “Search for a Champion” entry quickly caught the attention of racing enthusiasts, the Champion brand team and Harvick.

“Corey and Kyle’s passion for racing really jumped off the screen,” said Jessica Wynn, manager of brand strategy for Federal-Mogul. “It was clear to us – and to thousands of voters – that these two young racers are ready to take their program to the next level. We’re proud to help them do it.”

For additional information about the contest and “Performance Driven” Champion products, visit www.AlwaysaChampion.com.