The amount of smog-forming pollutants that are found in automotive exhaust today are a tiny fraction of what they were only a few decades ago. But the issue today isn’t so much about pollutants as it is about global warming. Some gases, notably carbon dioxide (CO2), retain heat much more so than nitrogen or oxygen. Nitrogen makes up about 78% of the Earth’s atmosphere, and oxygen about 21%. CO2, by comparison, accounts for only a tiny amount (0.04%). The rest of the air we breathe is argon (0.93%), water vapor (varies ­depending on humidity) and other trace gases.

Though CO2 accounts for only a tiny fraction of the atmosphere, scientists say it has a huge impact on heat retention and global warming. The assumption is that CO2 from the burning of fossil fuels and other manmade gases (such as R-134a ­refrigerant) is the cause. 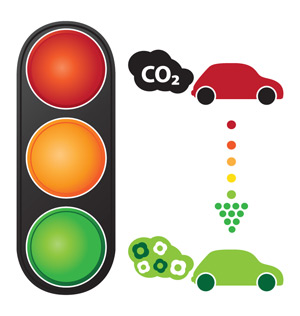 This assumption is highly questionable because CO2 from natural sources is about 30 times greater than all the manmade sources combined. What’s more, atmospheric moisture plays a much greater role in heat retention than CO2, methane, NOX and all the other manmade pollutants put together, ­according to various scientific sources.

Even so, the regulatory effort today is now focused on reducing carbon emissions (CO2) to counter global warming and climate change.

It all started with the Montreal Protocol back in 1987, which created a new awareness of how vehicle emissions were affecting the environment on a global scale, not just a local scale. The Montreal Protocol eventually led to the phase-out of R-12 refrigerant and other CFCs in most industrialized countries because of their harmful effects on the Earth’s ozone layer.

Another point worth noting about CO2 is that coal-fired power plants are the largest emitters of CO2, not automobiles. According to the Intergovernmental Panel on Climate Change (IPCC), power plants are responsible for about 36% of all manmade CO2. All forms of transportation account for 21%. But if you take out aircraft, ships, trains and heavy trucks, cars and light trucks account for only 11% of global CO2 emissions.

LIMITING CO2
As far as automotive tailpipe emissions are concerned, exhaust is about as clean as it can reasonably get with current technology. Yet the amount of CO2 in automotive exhaust has not changed. Prior to the flap over global warming and climate change, CO2 was not considered a problem because it is essentially an inert harmless gas. It does not cause smog. It is not harmful or toxic to breathe (assuming there is sufficient oxygen present). Plants absorb it to grow, and use it with photosynthesis to create cellulose and sugars. In fact, we all exhale CO2 every time we take a breath.

CO2 is also a natural byproduct of combustion. When any hydrocarbon fuel is burned (gasoline, diesel fuel, alcohol, biodiesel, propane, jet fuel, wood, coal, you-name-it), the byproducts of combustion are always carbon dioxide and water vapor (H2O). There’s no changing the equation unless you burn a fuel that contains no carbon (such as pure hydrogen).

To reduce overall CO2 emissions, therefore, you have to burn less fuel. That means either higher corporate average fuel economy (CAFE) ratings, or smaller displacement engines, or more fuel-efficient engines that get better mileage, or less driving, or any combination thereof.

In April, President Obama announced a new initiative to increase the CAFE standard for automakers to 35.5 mpg by 2016 (for many years, CAFE fuel economy standards have hovered around 27.5 mpg), which will reduce greenhouse gas (GHG) emissions to 250 grams per mile. Achieving this goal will require roughly a 5% increase in fuel ­efficiency each year, starting in model year 2012. The gains will be achieved by switching to smaller displacement, more efficient engines. Many of these will have direct fuel injection, be turbocharged, and have additional add-on, fuel-saving features such as cylinder deactivation under light load and/or start-stop systems to turn off the engine when the vehicle is not moving. 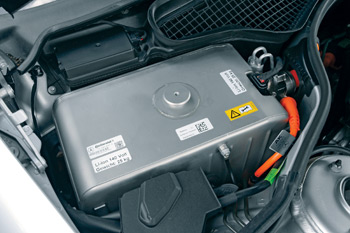 They say the new CAFE standards will cut oil consumption by an estimated 1.8 billion barrels of oil over the life of the program, and reduce greenhouse gas emissions by 900 million metric tons. It will have the same effect as removing 1.7 million cars from the road.

China’s car population has exploded in recent years, and will eventually catch up and possibly surpass that in the U.S. Last year, Chinese auto makers built more cars and light trucks than the U.S. auto industry. That’s a lot of new cars that will all be consuming fuel and emitting CO2 into the atmosphere.

It’s the same story in India, Eastern ­Europe and other developing areas of the world. Though many countries have adopted or ramped up their emission rules to Euro 2 or higher standards, their growing car populations are all adding more and more CO2 into the atmosphere. That leaves new technologies as the primary means of reducing the carbon footprint of a growing vehicle population.

THE DIESEL OPTION
Diesel-powered trucks have long been popular because of their fuel efficiency and torque. Compression ignition engines are up to 30% more fuel efficient than spark ignition engines. Because of this, Europe long ago turned to diesel as a more fuel-efficient alternative to gasoline engines. Today, roughly 60% of all European cars are diesel powered. Most of these are relatively small displacement engines, and many are turbocharged for added boost and horsepower.

Injecting urea into the exhaust stream creates ­ammonia, which reacts with NOX and breaks it down into harmless byproducts (nitrogen, oxygen and water vapor). Such systems require a separate control module, a special secondary catalyst, a urea reservoir (which needs to be topped off periodically), exhaust injection nozzle, and temperature and NOX sensors.

HYBRIDS AND PLUG-IN HYBRIDS
Hybrids have been hot for some time now, and are continuing to grow — though they represent only a very small percentage (about 2%) of the overall vehicle population. Growth has been limited by two factors: the higher initial cost of a hybrid and limited production capacity by hybrid battery suppliers.

Hybrid battery production is ramping up, with a number of new hybrid battery plants being built in the U.S. and abroad. This should make batteries more available and also drive down their cost. At the ­recent Society of Automotive Engineers (SAE) Congress, some industry experts were predicting that 25% of all passenger car and light trucks in the U.S. will be ­hybrids, plug-in hybrids or full electrics by 2020. 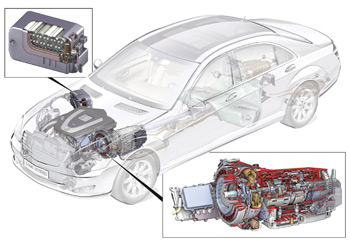 Though hybrid and plug-in hybrid vehicles still produce CO2 from their gasoline (or diesel) engines, the engines can be smaller and designed to run more efficiently than those in ordinary vehicles. The start/stop system also reduces engine run time when the vehicle is not moving, or is decelerating or coasting, to reduce overall fuel consumption and CO2 emissions.

Full electric vehicles produce the least amount of CO2. With no internal combustion engine, no fuel is burned to propel the vehicle, so there are no direct CO2 emissions. However, depending on how the electricity is generated to charge the vehicle’s batteries, there may still be indirect CO2 emissions from a coal or gas-fired power plant. Electricity produced by wind farms, solar panels, geothermal wells, hydroelectric dams or a nuclear power plant, on the other hand, have no carbon emissions. Several new nukes have already been approved in the U.S. (the first in decades!), and wind farms are popping up across much of the West and Midwest to reduce the demand on natural gas and coal-fired power plants.

MORE EFFICIENT ENGINES
Automakers have been incorporating all kinds of new technologies to improve fuel economy and performance (and thus lower CO2 emissions) in late-model vehicles. Almost every new engine that is being introduced is now using direct fuel injection, which boosts fuel economy about 15%. Many engines also have variable valve timing, which improves torque and performance. Cylinder deactivation and start/stop systems are also being added to some engines.

Internal engine changes that have also helped to ­reduce friction and boost fuel economy include thinner, low-tension rings, roller cams and roller followers for overhead cams, higher static compression ratios for improved thermal efficiency and lighter viscosity motor oils to save fuel. Today’s engine control systems are also smarter and faster than ever before, which provides greater control over combustion for improved efficiency and fuel economy.

Industry experts predict that 2016 will probably be the timeframe for the appearance of some full electric cars in significant numbers from major manufacturers. The pace of development will depend on the price of fuel, the availability of batteries and the availability of electrical power to recharge these vehicles.

Some experts say that as many as 30% of all new car sales could be electric vehicles by the year 2030. That’s 20 years away, but think back how much automotive technology has changed over the past 20 years (OBD I and II, CAN electrical systems, the growth of hybrids, etc.). 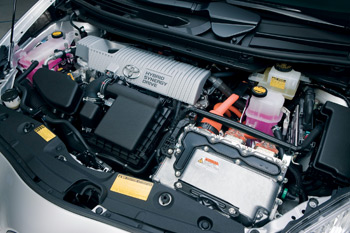 The internal combustion engine will be around for many years to come. But as we move forward, there will be more and more competition for limited oil supplies to power the world’s vehicle fleet. Huge new reserves have been discovered in many deep ocean areas of the world, including the Gulf of Mexico. But deep oil is very expensive to drill, and involves environmental risks of its own to safely extract it from under the sea and ship it to where it is needed.

Hydrogen has been talked about as a possible alternative fuel for internal combustion engines. Though hydrogen is the most abundant element in the world, it is expensive to make. Engineers have been dreaming about a hydrogen fuel economy since the 1970s, but it hasn’t happened for a variety of reasons. Hydrogen is a gaseous fuel, so it requires extremely high-pressure fuel tanks to store it. That limits the amount of hydrogen fuel a vehicle can hold, and thus its driving range. Hydrogen does burn clean, and produces no CO2 (only water vapor). But there’s no infrastructure for distributing, storing or dispensing hydrogen to motor vehicles on a large scale.

Electric power makes more sense because it can be cheaply produced from a variety of courses, and there’s already a distribution system in place. Every home has an electric outlet, so the power source is as near and available as the plug on the wall. Electric vehicles are also several times more energy efficient than a gasoline- or diesel-powered vehicle. That’s why many experts today believe we’ll be driving more and more electric vehicles in the years ahead.