Wonel Brown, owner of Wonel’s Auto Service Center in St. Louis, MO, finished restoring his son’s 1969 Chevy Nova and had it on display at the 49th Annual Concours d’Elegance and Easter Car Show at Forest Park.

Wonel Brown , owner of Wonel’s Auto Service Center in St. Louis, finished restoring his son’s 1969 Chevy Nova and had it on display at the 49th Annual Concours d’Elegance and Easter Car Show at Forest Park.

Below is the article as it appeared on the St. Louis Post-Dispatch website.

A father keeps promise to son who died 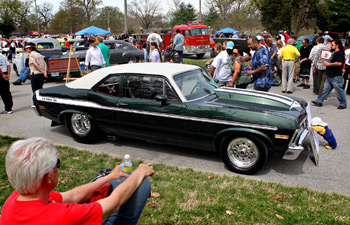 Many searched for one in particular among the hundreds of vintage cars and hot rods filling the parking lots and streets surrounding the Muny at Sunday’s Easter car show in Forest Park. Some even made a special trip just to see it.

It was a 1969 Chevy Nova, Jamel Brown’s dream car. And they were happy to find it painted green with white Yenko racing stripes and white vinyl top to match — just like Jamel had wanted it.

"I heard it was done," said Remington Snow, 35, of Bel-Ridge, as he shook hands with Jamel’s father, Wonel Brown. "She looks good. She looks like a queen now. You laid it home for him, Wonel. Yes sir."

Jamel died in November 2008 after collapsing during wrestling practice at Hazelwood West High School. An autopsy revealed a heart defect.

Since he was a boy, Jamel talked about how he wanted to restore a Nova. For Jamel’s 15th birthday in October 2008, Wonel Brown surprised his son with the car’s shell. They were going to restore it together at his repair shop, Wonel’s Auto Service Center in the Baden neighborhood in north St. Louis.

With his friends’ encouragement, Brown, 47, of Florissant, vowed to keep his son’s dream alive.

Brown gave it a motor and wheels, just enough to get the Nova to last year’s car show. He placed Jamel’s wrestling photo by the car on an unseasonably cold Easter and told passers-by about his son’s dream. A Post-Dispatch story also described his effort.

People filled a bucket that day with donations, about $2,000 worth, Brown said.

Though a few details remain, it was important to Brown to have the car finished by this year’s show. "This was his favorite. He loved this show," Brown said. "That’s all he talked about doing with his car: ‘I want to make sure to take my car to the Easter show."

Brown also wanted to tell show-goers thanks. He sent thank-you cards to those who sent donations to his shop, but this was the only way he knew to express his appreciation to the anonymous donors who had placed money in the bucket.

"I wanted to show them what their money did," Brown said. "I wanted everybody to see I’m not just a talker."

The sunny, warm day brought swarms of people to the park. One after another slapped Wonel on the back and said, "It came out real good" and "It’s real sharp" and "He would’ve loved it." Brown never stopped smiling.

Dan Shipp, 67, made a three-hour drive from Christopher, Ill., just to see the Nova. Brown’s story brought him to the show last year for the first time since his younger brother, Alan Shipp, died in 2001 from cancer. Over their last seven years together, they restored Alan Shipp’s dream car, a 1957 Chevrolet wagon. "I knew his hurt," Shipp said.

Shipp searched among the rows of cars, keeping an eye out for the Yenko stripes Wonel had spoken of, before finally finding it.

"I came out here to look you up and see if you kept your promise," Shipp told Brown. "Of course, I knew you would. It’s gorgeous."

Keith Worth, 47, of St. Louis, came to visit his friend Brown and check on the restoration progress. He was heading for a car covered in paint primer before the green color — which Jamel had always talked about — caught his eye. He was amazed at the transformation. "This was his vision. This is it," Worth said. "He brought Jamel to life."

Custom Carriage Auto Body in Berkeley donated the paint and body work. Jamel had shared his dream personally with family friend and co-owner James Thomas, 45. The employees worked day and night for the past month, fitting it in with their regular collision repairs, to get the Nova ready in time for the show. "(Brown) wanted it here for this show and done like his son wanted," Thomas said.

Brown said he believes his son’s spirit guided Thomas. "I’ve been teary-eyed ever since I seen the paint in the can," he said.

The car tells a story. Jamel’s initials are stitched in blue in the leather dashboard. The license plate bears his name. A plaque seen through the back window describes him as a polite boy who loved to fish and dreamed of becoming a mechanical engineer. It reads, "Faded but never gone."

To read this article on the St. Louis Post-Dispatch website and to see additional photos from the car show, visit http://www.stltoday.com/stltoday/news/stories.nsf/stlouiscitycounty/story/CFB9C421C5ED745D862576FC000D1FC1?OpenDocument.

From the Magazine: The Humble Mechanic: How Good Documentation Will Make You a Better Technician

Make Sure Your Transmission Jack Isn’t Out of Whack

10 Tips for Daily Brake Lathe Maintenance
Connect with us

From the Magazine: Make Sure Your Transmission Jack Isn’t Out of Whack